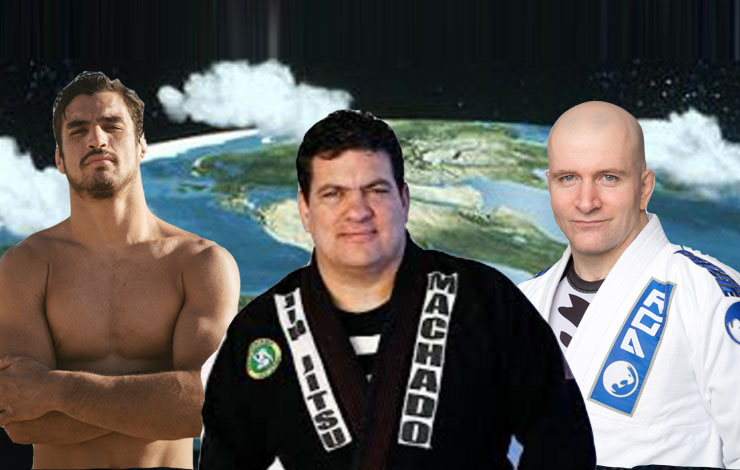 Brazilian Jiu-Jitsu inspires an awe inspiring lifestyle change in most of its beginners. From dedication to some thorough core changes, the benefits of lifestyle are undeniable: it will get you fit, it will have you thinking how to get the maximum out of yourself and much much more.

However the sport, has a bit of a similarity to religious institutions and much too often it leads to idolizing instructors. Instructors who are brilliant at bjj but can have quite a few misguided ideas about life, love, science and even morality and are in general flawed human beings much like the rest of us.

The son of one of the greatest fighters of all time Rickson Gracie, Kron appears to be having some sort of a middle age crisis in his early 30s. Faced with many expectations imposed on him by his father, brother and a myriad of observers he found himself believing in the flat earth idea.

Without digressing too much it’s suffice to say there are scientific observations that validate the idea of cosmos as we know it, and none of them come from an athletic 30 year old who hasn’t seen the inside of a classroom in a better part of the decade (if not longer).

Still his grappling match against Royler will always be one of the all time greatest. And his students prove 10th Planet has many merits in the grappling world in spite of many critics. The Eddie Bravo Invitational alone managed to alter the way we look at the grappling competitive scene.

Epic shot of our globe. Africa from space is insane. Can’t believe I once entertained the flat earth conspiracy

Then of course there’s John Danaher. Danaher is one of the best bjj coaches by far, this is something the grappling community largely agrees on. He is also one of the most educated people in bjj holding a  an  MA in philosophy earned over at Columbia University.

Renzo Gracie once told John Danaher (as per fightmagazine):

“I wanted to remove him from the academic world,” says Renzo. “I thought he was going to kill himself. Very depressive, very sad constantly, you know? I saw that, and I said, ‘You shouldn’t write about things that put you down for weeks.’ He was writing about religion—I said, ‘My man, our religion is jiu-jitsu! It’s our lifestyle!’”

But John Danaher has some very peculiar views on love and women, something his students often mirror:

“If I had a dollar for every girl that found me unattractive; they would eventually find me attractive.” Hahah pic.twitter.com/AunFRk51mT

Weigh ins for EBI 9: Normally weigh ins are a juggling act of training preparation and weight cutting. This time however, Garry Tonon is massively underweight for the weight class so there is no thought of weight cutting. As always we have to sign paperwork for the show – Mr Tonon’s response to the various media questions on his fact sheet were interesting to say the least. Other sports? Gymnastics, professional bull riding and nude chess…um…right. Previous accomplishments? 5X Chilean Sambo champion?…ok…Why do you compete? The three C’s…cash, chicks and championships…um…right…This boy has his priorities straight ??????????????

Of course these are fairly benevolent core values compared to some other. Just recently we uncovered a case where Rigan Machado appears to have promoted a registered sex offender to the highest ranking in bjj – the black belt level in spite of both vowing to sever their association and later posting a denial.

Machado also had other questionable calls such as establishing flow jitsu, claiming Ashton Kutcher could take McGregor and backing of Systema on what appears to be interest based venture.

Rigan Machado: ‘Train Systema, It Will Improve Your Jiu-Jitsu’

And this isn’t scratching the surface of the underbelly. Truth be told there’s plenty to get inspired over in the jiu-jitsu lifestyle however you’re still entitled to your opinion outside of the mats, opinions on everything from religion through love and morality.