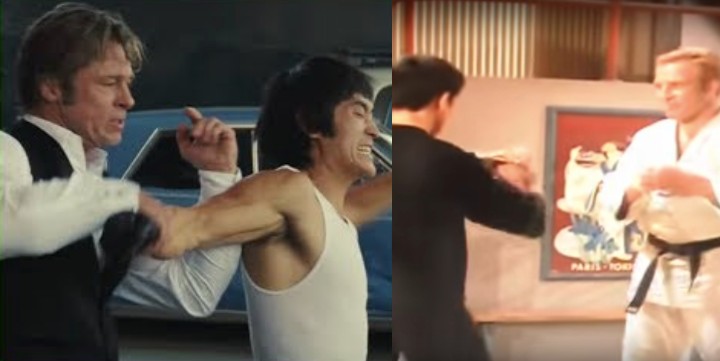 This scene is loosely based on world class Judoka Gene LeBell having worked as a stuntman with Bruce Lee on the set of the Green Hornet. Sounds familiar?

Did this scene really happen? Did Quentin Tarantino have some inside information about what may have happened between Bruce Lee and Gene LeBell on the set of the Green Hornet?

Tarantino appeared on Joe Rogan’s podcast and shared some insight about what really happened:

“Cliff (the character inspired by Gene Lebell) would destroy Bruce Lee in areal fight to the end.”

“All those that criticize me for what we did to Bruce Lee’s legacy they can eat a d**k.”

The co-author of Gene LeBell’s autobiography The Godfather of Grappling. Eugene S. Robinson told ozy.com about what really happened between the two men:

According to LeBell, Lee was a working stiff on the set of The Green Hornet but was kicking the shit out of the stuntmen. They couldn’t convince him that he could go easy and it would still look great on film. The show’s stunt coordinator, Bennie Dobbins, needed a ringer to deal with Lee, so he called in Judo Gene.

LeBell says when he got to the set, Dobbins told him to put Lee “in a headlock or something.”

So LeBell went up and grabbed Lee. “He started making all those noises that he became famous for,” LeBell said, “but he didn’t try to counter me, so I think he was more surprised than anything else.”

Then LeBell lifted Lee onto his back in what’s called a fireman’s carry and ran around the set with him.

“Put me down or I’ll kill you!” Lee screamed.

“I can’t put you down or you’ll kill me,” LeBell said, holding Lee there as long as he dared before putting him down, saying, “Hey, Bruce, don’t kill me. Just kidding, champ.”

Back on his feet again, Lee didn’t kill LeBell. Instead, Lee recognized that the lack of grappling was a deficiency in the Jeet Kune Do style of martial arts he was developing. So Lee trained with LeBell for a little over a year with LeBell showing Lee armbars, leg locks and takedowns, and Lee schooling LeBell in kung fu kicks.

After training with LeBell, Lee incorporated grappling moves into his film fighting. He finishes off Chuck Norris with a chokehold in Way of the Dragon (1972) and beats a young Sammo Hung with an armbar in Enter the Dragon (1973).

UFC president Dana White once described Bruce Lee as the Godfather of MMA because of his highly evolved way of exploring various combat sports.

Gene LeBell is truly a Judo legend. In 2000, the United States Ju-Jitsu Federation (USJJF) promoted him to 9th Dan in jujitsu and taihojutsu. On August 7, 2004, the World Martial Arts Masters Association promoted LeBell to 10th Degree and in February 2005, he was promoted to 9th Dan in Traditional Judo by the USJJF

LeBell has worked on over 1,000 films, TV shows and commercials as a stuntman or as an actor (including multiple appearances as himself.) LeBell appeared in three Elvis Presley movies as a minor character who starts a fight with the character played by Presley. In addition he also worked on the set of the Green Hornet TV show, in which he claims to have developed a friendship with Bruce Lee. According to Lebell’s claim, Lee was especially interested in exploring grappling with help from him and exchanged ideas on various fighting techniques.

Quentin Tarantino responded to criticism of the arrogant portrayal of Bruce Lee:

“Bruce Lee was kind of an arrogant guy. The way he was talking, I didn’t just make a lot of that up. I heard him say things like that, to that effect. If people are saying, ‘Well he never said he could beat up Muhammad Ali,’ well yeah, he did. Not only did he say that, but his wife, Linda Lee, said that in her first biography I ever read. She absolutely said that,” .

“Could Cliff beat up Bruce Lee? Brad [Pitt] would not be able to beat up Bruce Lee, but Cliff maybe could. “If you ask me the question, ‘Who would win in a fight: Bruce Lee or Dracula?’ It’s the same question. It’s a fictional character. If I say Cliff can beat Bruce Lee up, he’s a fictional character so he could beat Bruce Lee up. The reality of the situation is this: Cliff is a Green Beret. He has killed many men in WWII in hand-to-hand combat. What Bruce Lee is talking about in the whole thing is that he admires warriors. He admires combat, and boxing is a closer approximation of combat as a sport. Cliff is not part of the sport that is like combat, he is a warrior. He is a combat person.”