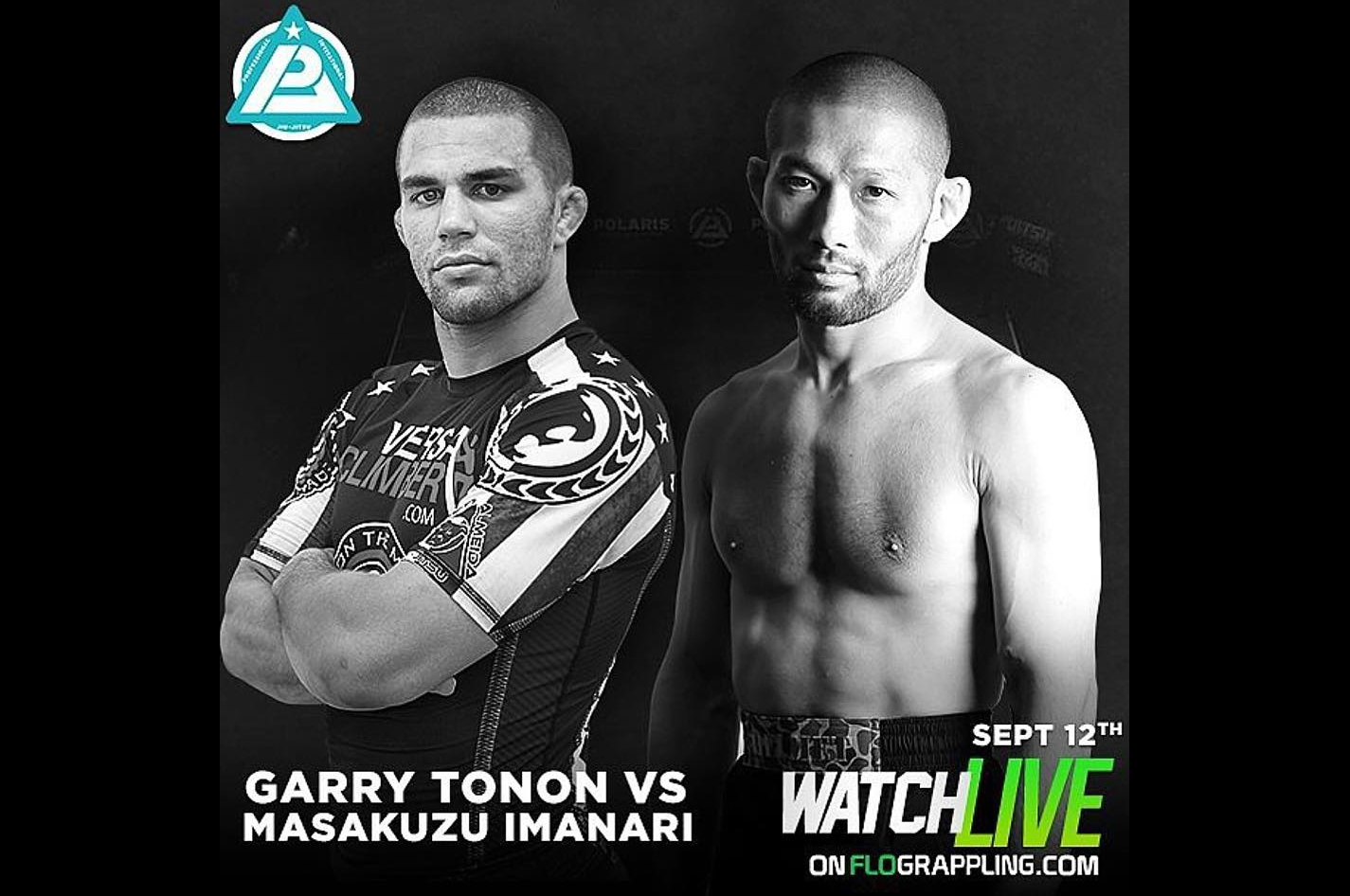 Written by BJJ Scout for BJJEE.com and Polaris Jiu-Jitsu Invitational.

Garry Tonon fights at Polaris 2 against the most lethal Japanese leglock artist in the game, “10th Dan Master of Leglocks”. Imanari is a Brazilian jiu-jitsu black belt under Marco Barbosa of Barbosa jiu-jitsu. Imanari is a veteran of DEEP, ZST, Pride Fighting Championships, and Cage Rage and also has had a successful career in Combat Wrestling, placing as high as third and second in their All-Japan championship tournaments. He was the final Cage Rage Featherweight Champion, DEEP Bantamweight Champion, the former DEEP Featherweight Champion and Dream Japan Grand Prix Finalist. He holds 19 submission wins in MMA (mostly leglocks).

When Garry Tonon meets Imanari Masakazu, two elite leg lockers meet in a clash between the old school and the new school. Wait though, Imanari is hardly what one might call “old school”. But as we will see below, Imanari is what I would term a first generation leg locker, an early pioneer in a grappling sub-discipline that has been frozen in time, slow to evolve due to the more popular “sport” brazillian jiujitsu attracting most of the grappling talent.

Garry Tonon on the other hand, is one of a new crop of grapplers specializing in leg locks. He has not merely added leg submissions to his game though. A pure leg locker is a flawed proposition. Garry has made a conscientious effort to understand what makes leg locks work, why/where are they weak and what are the needed adjustments to be made to make leg locking more than a just “surprise” tactic.

There are many aspects to both these grapplers that make them worthy of study, and my purpose will not be to instruct or point out their plethora of “moves”, a task unsuited of this format. Rather I will focus on where I see the likely strategic battles occurring.

Imanari is known to most in the grappling world, by reputation if not by face. The very definition of “scary leg locker” has been attached to Imanari for over a decade now.  Inamari’s game plan primarily exploits the lack of leg lock savvy of his opponents. Many times, Imanari is counting on you to panic and escape sloppily, allowing him space to find the appropriate leg lock to finish the job.

Fundamentally though, he typically either shoots in legs first or baits them into stepping into his guard to get single leg x-guard (SLX) or 50/50. He then proceed to squeeze and apply a lock, getting the tap soon after

One of his key entrances is the Imanari Roll, a modified granby roll that puts him into inverted guard position, whereupon depending on what you do next, he can get SLX or 50/50.

However, lack of options to get into a leg locking position beyond “tricking” his opponent has been Imanari’s downfall in past grappling exchanges. Against strong positional grapplers that take dominant position (side control, mount) he has consistently been stuck on bottom due to his limited sweep arsenal. Even against those less grappling savvy, not engaging the Imanari Roll or staying on your knees in his guard and stalling has been a decent counter measure.

To somewhat mitigate this, Imanari’s other main entry into a leg lock is to use his closed/rubber guard to set up some kind of “pull away” from an opponent. As they stand to flee a submission/posture, he spins into the leg lock again one way or the other.

The fear of stepping into the unknown when facing a grappler like Imanari has caused many to panic, only hastening their demise. Good leg locking instruction is scant and there are so many areas of MMA to learn that many of his opponents have simply been bamboozled. He has yet to face someone that “knows the game” and Garry Tonon will be his sternest test.

Garry’s leg lock game was built on scouting early leg lock pioneers like Palhares, Imanari, Lister, Paulson etc in order to develop what we see today. Since my last breakdown video of Garry on my youtube channel, there have been several developments to his style, namely the innovative use of the kimura (both top and bottom) and enhancements to his half guard i.e lockdown and octopus guard. For this preview though, as I feel Garry is unlikely to play guard, I will focus on his leg lock game.

Garry can do all that Imanari does but more importantly, Garry addresses several problems with leg locking:

Unlike the more conservative Imanari who prefers the safety of closed guard, Garry is an active sweeper. Garry increasingly is not going for opportunistic reaps from bottom but is constantly creating opportunities to get back to top position to leg lock.

One big enhancement to Garry’s half is the increased use of the lockdown to sweep back to top. I won’t go into detail here but this is useful as when he cannot pummel under into deep half guard.

Another clever trick he has is to take your back or reap in when you go for an arm he leaves for you as bait when you have top half position.

Garry has a reputation as a “submission over position” grappler, but even he realises the folly of this when taken to the extreme. These days, he is looking for certain key leg control positions when he grapples. These positions allow him to stabilize the action and give him multiple chances to get a submission.

2 leg control positions most would be familiar with are 50/50 and the truck. In addition to these Garry is now a big user of the “saddle” and “reverse saddle”. Do consult instructionals but in a nutshell:

The saddle is a big improvement to a leg locker. With the reap, you control the hips and stop standing. With the far leg controlled, hip control is enhanced and when someone turns, you remain connected to them and you can try again for a different leg lock. Look below to see how leg control stops rolls, allows submission chaining and allows you to follow a spinner.

The reverse saddle, is another good position that allows you to maintain top control while you work for a leg lock.

The main submissions off reverse saddle are the heelhook, kneebar and toehold:

The reverse saddle switches fluidly with 50/50 and the saddle and is a key position to look for when someone tries to turn to escape leg control or for some reason will not let you get the saddle immediately.

Garry is very creative in transitioning to the reverse saddle and is continuously innovating how to move between these leg control positions and traditional control positions. Look at the possibilities:

Sitting on your hip, the reverse saddle is an important transition for Garry as it allows him to keep top position while still threatening your leg. This greatly mitigates the loss of top position when you drop for a leg lock normally. He can quickly bail to reverse saddle from either 50/50 or saddle and settle down again rather than ditching everything in a panic. In addition, you can go on your knees, allowing you to come up fast in a scramble.

In a nutshell, here is the subtle but important difference between Garry’s leg lock philosophy and Imanari’s. Imanari doesn’t use much leg control and is often hit or miss. Garry on the other hand, tries to get leg control first before working for the submission. Case in point, Imanari often rushes his outside heel hook and finishes looking up – hands exposed to be grabbed and the opponent free to stand or spin. In comparison, Garry rarely does this but looks to always finish outside heel hooks belly down.

Also, in scrambles Garry often looks to protect his reaps and consolidate leg control during his opponent’s escapes rather than doggedly clinging on to the sub, knowing he can work another one if he can keep leg control i.e. leg control over submission.

Imanari on the other hand is quick to jump for a leg lock before consolidating leg control i.e. submission over control.

Garry’s defense versus a good leg locker is also worthy of study. To be frank, Imanari will not be Garry’s sternest leg lock test. He faced his team mate Eddie Cummings (another new generation leg locker) at EBI 3 and showed us what to do when you meet a next level “control leg locker” like himself. Garry shows us the importance of 1) recognizing the critical structures you must stop from forming and 2) being defensively responsible when you run.

Here is what someone who is naïve does:

Here is what Garry does:

No hand/head grabbing. No spinning away while leaving your leg in, only to immediately push back in immediately to pass/stack. Garry understands it is critical to see the control structures forming and pre-emptively fight the legs. Without control positions locked on, he can escape. He understands the folly of turning to immediately try get top position while leaving your leg to get trapped again. He runs giving his back, not anxious to reach back for a head or to hand fight.

Garry also shows us, you don’t need to fight fire with fire when fighting a leg locker. Garry knows stepping in legs first to pass is folly. Against some leg lockers previously, he has gone low with underhooks to stack, looking to pass into dominant position or get the truck. I have covered the use of stacking extensively on my site as a way to defeat complex guards. Garry shows stacking is viable against a leg locker.

How this will go down

Garry knows what Imanari does well (the tricky entries) and he knows his weaknesses too (no saddle or other leg control positions). In comparison, Imanari has stayed pretty much the same grappler through the years and I am not sure if he places any emphasis on studying his opponents beforehand.

Almost certainly Imanari will play guard (probably closed) while Tonon will have several options. Garry could engage in a direct leg lock battle and exploit the space from Imanari’s lack of leg control to get his own dominant leg control. Or he could choose to not even engage in a leg lock war and pass with double unders, looking to dominate position and submit from mount or back.

That being said, Garry has tended to concede position and flow, looking to win scrambles against opponents he feels he has a technical edge on. Imanari could well seize on those moments where Garry concedes mount/side etc to go for a traditional submission.