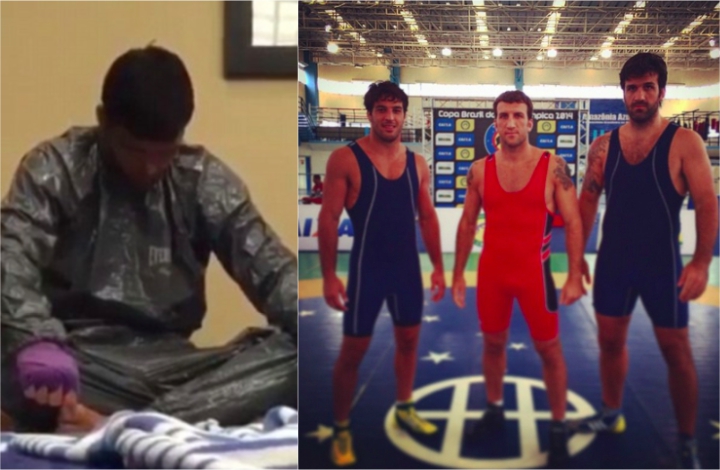 Wrestlers and fighters cut weight for competition so they can have an advantage in combat. Whether you’re a youth, high school, college or professional athlete, being the largest competitor in your weight class can make all the difference in winning or losing the match. This often involves rapid weight cutting for the weigh-in, followed by replenishing the body back to its normal weight or preferably even heavier, hopefully giving you a size and strength advantage. While cutting weight will get you into the tournament, the replenishment process is equally as important as it will definitely impact your performance. Eating junk food or fast food directly after hard dieting or fasting is like emptying your car’s engine and then refilling it with sand or contaminated gas. The first fuel you put in your body after emptying it will be exactly what’s used for its first run; the food choices you make will determine whether you shine or gas on the mat.

When it comes to performance nutrition, timing is equally important as what you eat. Athletes who get to weigh in the day before their competition have a tremendous advantage over those who must compete an hour or two later. Depending on how severe the weight cut, it can take up to 12 hours (or longer) to get completely replenished back up to a desired body weight. With the right foods, strategy and planning, this process can be done effectively much faster, however the longer you have to recover from a hard weight cut the better. It’s common for high school wrestlers to weigh in Friday afternoon to compete on Friday night, have to make weight again Saturday morning for another tournament all day Saturday. Often when this is the case, the athlete is given an allowance of 1-3 lbs. for the Saturday meet, however this is a situation that must be managed carefully. Replenishment for the Friday competition must be controlled so it’s effective but not enough to throw off their weight cut for the next day.

After weighing in, choose foods that will be absorbed quickly and provide the best fuel for your upcoming performance. While protein is extremely necessary during the weight cut to prevent the loss of muscle mass, it has little place in the replenishment process. Protein will not give you the energy you need to perform on the mat and will only take up room in your stomach. Carbohydrates are the best types of food to eat for an upcoming competition after a weight cut. However avoid simple sugars that are overly processed like candy, cookies, snack cakes, Little Debbies, etc. Foods like this will give you an uncontrolled fast spike of energy followed by a crash of sleepiness and lethargy. Choose carbohydrates from two different categories to replenish the body with good weight and the best, most usable fuel. Clean, starchy carbs such as sweet potatoes and rice are excellent for filling the muscles with glycogen for even released energy to be used in the next few hours of the meet. Breads and bagels are secondary choices however are sweet and filling and also work well.

For faster energy, fresh, juicy fruit is great and very rejuvenating to the wrestler who’s survived an arduous weight cut. Apples, grapes and oranges are sweet, delicious and satisfying when in season. Bananas and prunes are also packed with potassium and natural sugar to be used for energy in the next hour of performance. Other foods that are good quick energy choices for replenishing the body are graham crackers, animal crackers and even yogurt however these are secondary and should not be filled up on. While fats are filling and satisfying to eat, they should be eaten in very small amounts or even avoided as they will slow down the absorption of sugars needed for energy. Too many will also give the wrestler a heavy, sluggish feeling in their gut. Wrestlers eating peanut butter sandwiches on white bread is a common sight at many tournaments, however this is an error. While this food is sweet, filling and easy to fix, peanut butter can sit heavy in a wrestler’s stomach while the gluten in the white bread slows the motility of the gut to a standstill.

For the fastest and most complete replenishment after a weight cut, divide your carbs into a number of small meals and try to resist gorging yourself. Forcing too much food into the gut at one time will give it more than it can handle and cause a temporary blockage, slowing down absorption and making the athlete sick, sometimes feeling heavy, lethargic and even nauseous. If the athlete had to restrict water to make his weight, the first thing in his mouth should be at least 16 oz. of water, then he can start eating. A great strategy is to combine both simple and complex carbs in a controlled volume over a period of time. For example, after drinking water the first meal would be 1½ – 2 cups of white rice with honey and a piece of fresh fruit. Sixty to ninety minutes later, eat another 1½ cups of white rice + honey, some graham crackers and more water. For a third meal, eat more carbs primarily however go ahead and add some protein as well. An example would be another 1½ cups white rice + honey, a tangerine and 3-4 oz. of lean turkey breast.

Feeding the body small meals of dry carbs combined with drinking water like this will shuttle glycogen and fluid into the muscles quickly and effectively. After the body has gone without food and/or water for 8-12 hours (common practice for cutting weight), the fuel we put into it directly after will determine its upcoming performance. Replenishing with this strategy leaves athletes energized and ready to go after the first 1-2 meals; they feel alert and light, not bogged down by a bunch of heavy foods laden with fat and preservatives in their gut. Adding a bit of protein to the third meal helps to slow down the absorption of the carbs after the muscles have been replenished from the first two. This will allow fuel for later as well as a more full feeling that lasts a bit longer. After not eating protein for this long, it’s also important to start feeding the body amino acids again to help muscles recover after competing. The third meal can also contain some fats if you want however better without or with very little as they have little to do with immediate performance and only act to slow you down.

While cutting weight may be what gets you into the competition, if you don’t have a strategy of replenishment, you will be weak, tired and unable to perform at your best.

Using a strategy like the one noted above will ensure you are fully replenished, feeling great and ready to go for your first match. Focus on a mixture of fast acting starchy carbohydrates combined with natural simple carbs and eat this in a number of small meals to ensure the body completely absorbs each one. Drink plenty of water so the muscles will shuttle both fluids and glycogen into storage for quick action and immediate performance. Do this repetitively 2-3 times based on fullness, energy levels and your competition schedule. Avoid fats to prevent slowing down absorption of nutrients and that heavy, sluggish feeling common to these types of foods. After 2-3 carb only meals, add some protein to a later meal to aid in recovery after competing and provide a slightly slower digestion of carbs for energy later in the day.

I’m Dan Levesque, owner/operator of HighlandsFightGear.com. We are an online store that sells wrestling singlets, footwear, headgear, kneepads and all other wrestling equipment. I have been a sports chiropractor and professional powerlifter for more than 20 years and have personally trained and coached many high school, college and professional athletes. After working with numerous coaches from various sports over the years, there’s no question as to the validity of performance nutrition. From working with athletes and competing myself, I have much experience with the cutting weight process and know the best way to keep it healthy while maximizing performance. Visit our website for more training information, contact or to find the best wrestling gear, mma and combat training equipment for sale at discount prices.