Pawel’s Story: From The Hospital to the IBJJF Rome Open Podium 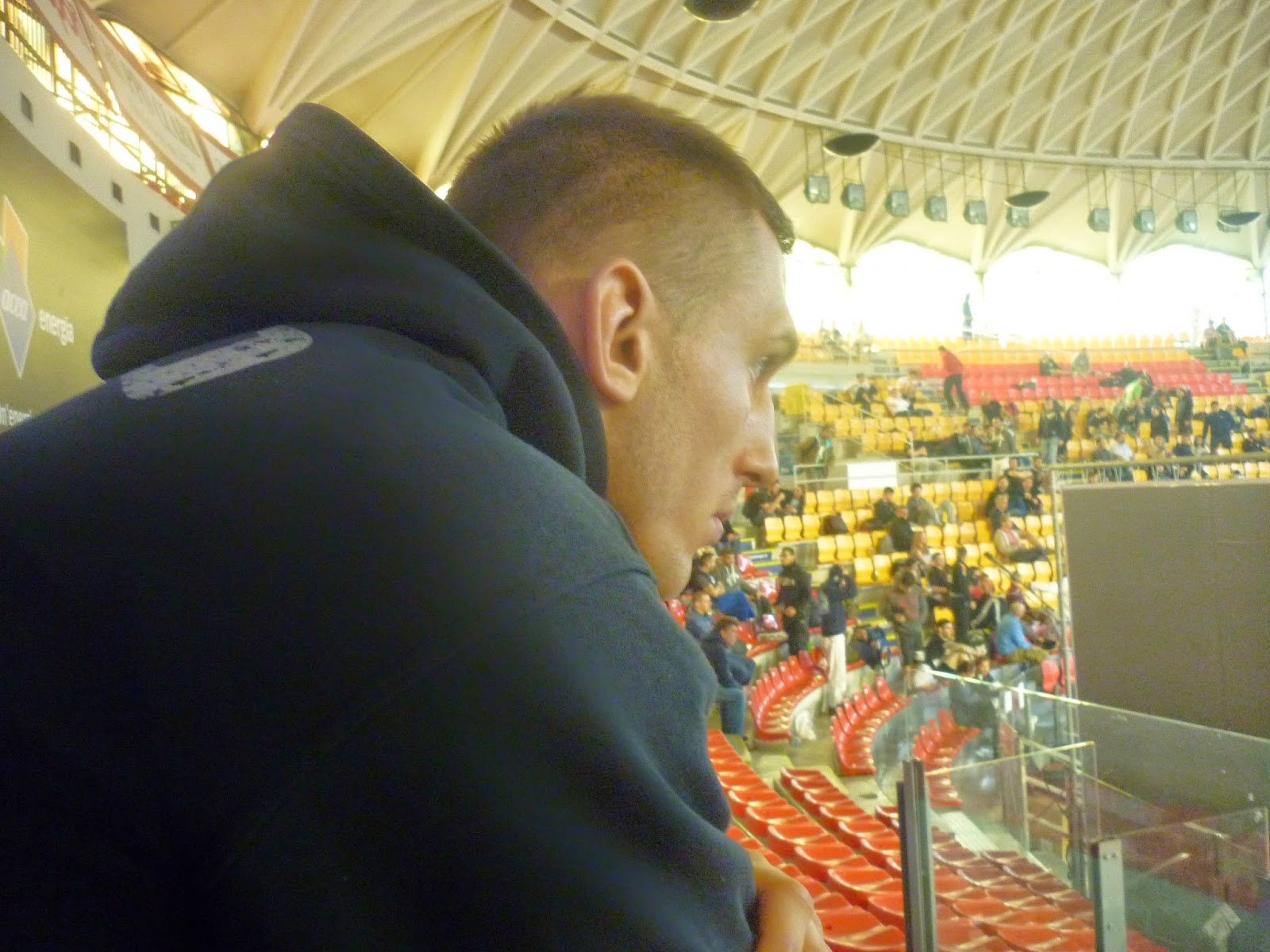 At Gold Team summer camp 2103 my coach Maciek Linke set me a goal: “You will get the Black Belt after winning a medal at the international competition”. Immediately I began intense preparations for IBJJF Rome Open 2014 which was on April.

I injured my spine and I was not able to walk or stand up straight. But I rode well and I had plenty of time to improve the fight from bottom. But seriously I was really depressed and scared that I would not return to the sport.

Here’s my first reflection from the period of preparation for the Rome: To want is to succeed.

I realize how corny it sounds. The truth is that in most cases, simple solutions works best. Such was the case with my injury – was enough to want … and grind my ass off.
Here, a big thank you to Krzysiek “Naturals” physiotherapist, Piotrek “Ovoid”, motor preparation coach. Once that they’ve visited me in the hospital, and pulled out of it, two they’ve arranged a treatment and rehabilitation training, “you can not workout standing up, then you will workout lying“. With their help, in January I returned to full training.

All roads lead to Rome Open

My preparation plan for Rome Open was divided into the following stages:

Each step was associated with adequate diet.

The hardest thing in the preparations for me were not workouts themselves. Since the work is mostly characterized by the fact that begins in the morning and ends in the afternoon, it required me to stand up for draconian 5am to do the first workout. There was also no way of cooking in the morning. I fought with dropping eyelids, fighting with chicken, so he go into the pot, would be too much. At work I often was not able to collect my thoughts and fell asleep frequently. That’s what made me the most difficulty is to reconcile: work, diet, training, rest, private life (what private life? bitch please!). In short, “the maintenance of proper rotation”:

My second thought: Whatever you do, have people who want to help you.

I was fortunate that my girlfriend Aga helped me every tiny step. From throwing chickens to the pot, by bearing my moods, when I had to set aside sweets, to act as my psychologist, when I’ve already started feeling stressed before the start. I think it is possible to do all of this yourself, but it’s certainly easier when someone supports you.

Brace yourself. Rome Open is coming!

Fortunately, Lady Luck was on my side. Over the last month I had the opportunity to see that my Chaos-Boys are a respectable company and I can count on them. They came every day, sometimes twice a day to fight me on kakarigeiko (one fights all the time, opponents change and rest in the meantime). After a moment of consideration, I’m not so sure if it was sincere desire to help or just thinking like, “ha ha, Spider will be tired, I will choke him today.”

At this point, many thanks (by belt stripes) for you guys that you came in the morning, evening, during the day and at night to fight me: Cyclops, Kroko, Rumcajs (he came up from Szczecin!), Brandon, Zangief, Leon, Osama Wolwi, Kermit, Bison, Quiet, Spiker, Prank, The Oval + people who perhaps missed.

Surprise and a big injection of energy before the start there was a photo that my players did for me before the competition. +1000 to mobilization, seriously:

My weight was very uncooperative. I have been eating almost no carbohydrates, and everything else was also like medicine portion. So I ran, starved and stressed about whether the scale will be gracious.

My 700g overweight. The day before the start:

I wasn’t sightseeing Rome before the competition much. The smell of pizza, panini and other Italian delicacies were not facilitating holding the weight. Besides, I weighed myself an average of once an hour hoping that excess pounds magically disappeared. Each time, to my disappointment, it turned out that it did not happen.

I devoted time to watch Homeland, read the articles on BJJ Eeastern Europe and arranging the list of things I eat after competition.

Very cool atmosphere of tournament. I have not met with churlish screams like: “Get on with this dick” or glances full of hatred against rivals / members of the opposing team. Also I haven’t experienced any quarrels with the judges or insulting them. Such behavior, what I really do not like, happened at Polish tournaments. Judging made an impression on me, both meticulous and very reliable. Also relative punctuality of commenced category was surprising. The atmosphere among the athletes was really friendly. Obviously, nobody was focusing on relationship building before the fights, but after people were arranging some night outs. It was nice also to meet Poles and keep fingers crossed for their fights.

First fight I had with the Greek. At the very beginning of the fight, fact that I do not get swiped from the bottom, I owe probably only to numerous stabilization training, because I really felt like I’m flying already. At the time, when he came grabbed Kimura I thought to myself, “fuck that, I won’t give you this hand!”. There at the end it is difficult to see, I used the top of the modern technical thought in jiu-jitsu: “Fist in the neck.” I would recommend.

The second fight I had with the future winner of the Abu Dhabi World Pro. In this duel I lacked a little luck and a little experience strictly from the competition. Luck, because the whole time I was back to the blackboard point. Experience, because I counted points wrong in my head, did not check them, and I was convinced that I’m losing coarsely. In this way, one minute before the end of the fight, when my opponent was at the bottom in deep half guard, I decided that I need to submit to win. I went to Kimura, rolled over (at the time when it is interrupted film), he escaped out of finishing technique and got 2 points for sweep. There was a minute to the end, so he bunkered up and won by 1 advantage.

The next day, No-Gi fights. I fought with Kamil Umiński. I think the main mistake on my part was an attempt to 2x the same technique. Kamil was better. He won category and won the silver in the absolute for which he deserves sincere congratulations!

All my opponents were very strong and very well prepared. I think that if someone decides to go to the European Championships type competitions and give it a lot of money (flights, accommodation, etc.), does not approach this as “what the heck, I will sign up”. 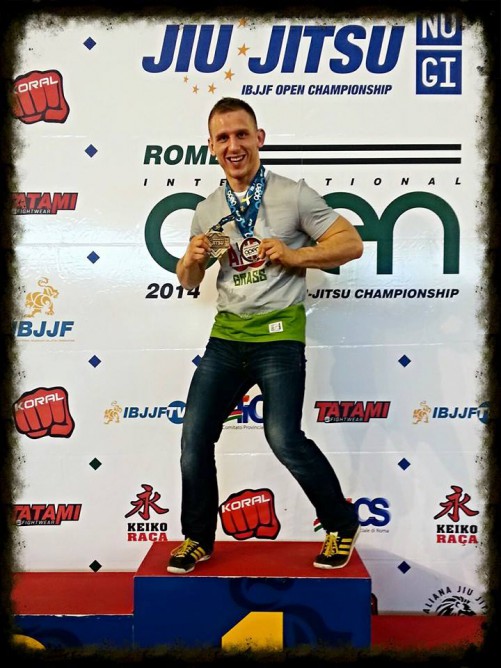 After the Rome Open

Chicken, sausage, broccoli, lasagna mixed with pizza, half a kilo of chocolate and ice cream. This is how I celebrated medals and the end of the diet.

… And then several others. I put on a mask, so no one recognize that diet has gone to waste:

And life goes on

The competition is over and I had to go back to everyday life. However, the balance is certainly not zero. Such trip gives A LOT:

I think that the preparation for the competition is not a choice such as “I need to quit life and work.” It is rather a decision: “I expect more from life than work and daily routine.” Start requires of you additional determination, physical and financial sacrifice, better time management. However, it makes your life incredibly organized, set in the present, more experienced (every second on kakarigeiko lasts forever).

I saw on this competition guys who came with their wives and kids. The whole family cheered them. I thought, ” what a great thing is that it integrates them so.” Each of us has their favorite action movie heroes. I think that such a holiday with family or buddies is a way to become one of them yourself. There are emotions, action and joy out of the fact you have reached the goal – to give it the maximum.

It is a mistake to think of the competition in the category of winning or losing. It’s a game with a negative balance, eventually the gold medal is only one, and people competing much more. In addition, we have 45% impact on winning chances, as much has the opponent and 10% is luck. However preparation is 100% dependent on us.

A lot of people after being nominated to higher belts decide to rest on their laurels. They think about the belt, as a goal itself, not as a feedback on their progress on the path of life BJJ. Day when they get their belt is the last you saw them training. I want my students to think about it in the context of the road, not a goal or a point. All of these values ​​that you gain on the way: weight loss, overcoming fear, regularity, etc. stay. Memories of the trips, all the funny situations and time spent with cool people too.

I say this because I hope it will mobilize you to come out of your comfort zone and try to put yourself damn uncomfortable goal, just for yourself – prepare and go to competition. BJJ is not only a mat. It is a way of life, striving to be better and better. Your work, personality and life areas seemingly unrelated with jiu-jitsu will benefit .

I begin preparations for the London Open. Who is willing to leave his comfortable seat and move with me for the preparation of the glory?