Paul Walker Gets Promoted To BJJ Black Belt At Memorial 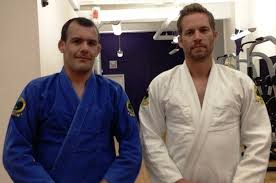 Paul Walkers BJJ Trainer Ricardo Franjinha Miller, Owner at Paragon Bjj Academy and Owner at Ventura Paragon Brazilian Jiu Jitsu awarded the deceased movie star with his Brazilian Jui Jitsu Black Belt during his memorial. Walker was a brown belt at the time of his death.

“I know he will reach it one day”, read a statement from Miller. “So in his memory, I presented it to his Dad at his family memorial.”

“As I reflect back on his life, I remember one of our first conversations. Sitting in our gis on the mat, Paul was like many white belts; he wanted to know about becoming a black belt. I told him that at Paragon we don’t give away black belts. I said that I didn’t care who he was, I was not giving him a ‘celebrity black belt.’ He loved that! He said that he knew that he was starting late (he was 31), but he was determined to become a black belt. He said ‘I will get my black belt, even if I need to get it in my coffin.’ Now in the wake of his death, I would like to award Paul Walker the black belt that he wanted so much during his life.”