Opinion: BJJ Is Not Enough If You Want To Learn Self Defense 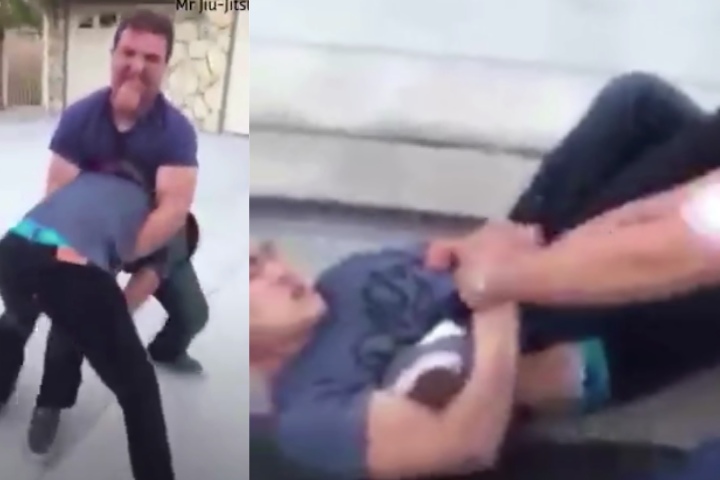 Everyone has different reasons for starting Jiu Jitsu. Some want to lose weight and become healthier, others were persuaded by their friends, and some were recommended a video (thanks, Youtube algorithm) of someone RNC-ing their training partner. And some, well, started training it because they wanted to increase their self confidence by learning self defense.
However, while BJJ truly is great for defending yourself, it isn’t enough.

WHY BJJ IS GOOD FOR SELF DEFENSE

But before you start throwing bricks at us, let’s begin with the preface: BJJ really is good for self defense.

Remember that first time you came to a Jiu Jitsu class? Or the first time you rolled? Everyone was able to tap you out. No matter what you did or tried, no matter how much effort you placed in „staying alive“ – you were tapped out left and right.
This is only natural, of course! You came in there with zero knowledge and zero experience. But, as you began to learn bit by bit, you started tapping others out.

In a street fight situation, BJJ can serve you well, especially against opponents untrained in fighting. Furthermore, it can serve well in one-on-one situations. But when things get crazy – as they often do in street fights – you should reconsider if your Jiu Jitsu is going to be enough.
If you’re in a packed place, such as a bar… It’s not a good idea to take the fight to the ground; especially if the other guy has his buddies with him. Plus, you may not have the chance to showcase all of your skills on the floor, if the guy knows how to punch.

Quite simply: BJJ is fantastic for self defense. Perhaps even the best single choice for it. But if you really want to learn how to defend yourself – how to fight – you need to train other martial arts as well.
And your best picks? You’ve guessed it: wrestling and boxing.

So why should you add wrestling to your Jiu Jitsu practice? The answer is immediately obvious from the sports point of view: it’s going to help you become a more complete grappler and a much more efficient competitor. Learning to wrestle is going to help your BJJ a ton!
On the other hand, from the purely self-defense perspective, wrestling will help you close the distance and immediately control the other person.

If you’re focusing only on Jiu Jitsu, you may “expect” control to come your way once on the ground. However, before you’re on the ground, a lot of things are happening – wild punches are flying around, to say the least.
Learning how to wrestle will teach you how to close the distance and then proceed to finish the fight on the floor. In turn, this means that you’ll be much less exposed to being knocked out by a punch.

Also, being able to throw someone is an immediate show-stopper. But it needs to be carried out with caution, as it can lead to very serious injuries, lawsuits and even death.

And secondly, you should really consider taking up boxing if you’re in search for self defense. You don’t need to become an exceptional boxer (you should probably focus on wrestling more, as it translates to Jiu Jitsu), but you should at least understand how to block and throw a basic punch or two, as well as how to move.
On top of that, spending some time boxing will get you used to how the human body moves; so you’ll be able to better recognize when someone wants to knock you out.