Brazilian Jiu-Jitsu is a fast growing martial art in Poland and Polish BJJ scene is rich and diverse. (read about the history, success and future of BJJ in Poland).  Most towns now have a BJJ academy and bigger cities boast an array of schools often ran by black belts, whose number has long surpassed 100. You can find affiliated academies of most of the major jiu-jitsu schools: Alliance, Atos, Braza, CheckMat, GB, Macaco Gold Team, Zenith to name just a few. The number of practitioners is growing steadily and so is the number of competitors who take part in frequently organized tournaments. You can compete pretty much every other weekend without leaving the country and the biggest tournament (Polish National Championships) gather an astounding crowd of well over 1000 competitors.
Apart from competitions, there are also other initiatives aimed at improving the level of BJJ in Poland- for example WarszawskieSparringi BJJ (Warsaw BJJ Sparring Session). First edition of WSBJJ took place in January 2014 in Dragon’s Den Fight Club. The sparring sessions are organized every month (unless there is an important tournament coming up), are free of charge and open to everybody regardless of level and academy affiliation. The idea behind it is to provide practitioners with an opportunity to roll with people from other schools / cities and learn in a friendly atmosphere without the stress of a competition. While an excellent preparation for such, they are a good option for the people who for some reasons (stress, lack of time / money) don’t want to compete but who do want to learn and improve their skills. It provides an opportunity to meet new people and above all to learn new trick and test your game. It’s not the same to roll with the guys you know from your academy and to roll with somebody you see for the first time or only meet occasionally. The atmosphere is great- competitive without losing it’s friendliness. 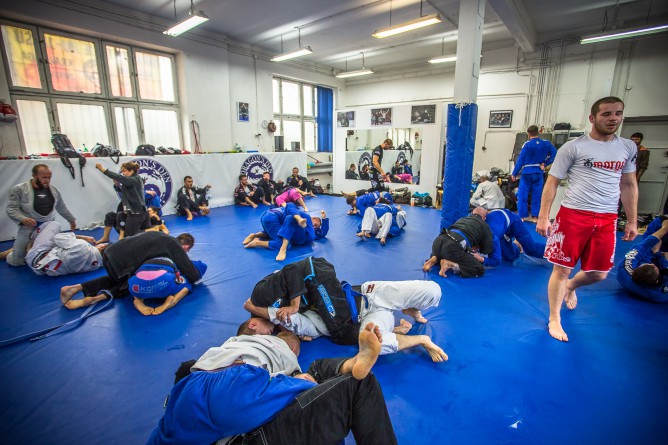 The initiative has been a big success and is now expanding- other Polish cities and regions are creating their own sparring sessions open to people from different academies, e.gTrójmiejskieSparringi BJJ/SF in Trójmiasto (Gdańsk, Gdynia, Sopot) or PodlaskieSparringi BJJ (Urban Jiu-Jitsu Białystok) and there is a separate girls-only event for female BJJ practitioners (Sparringi Na Obcasach- “Sparring on high-heels”).