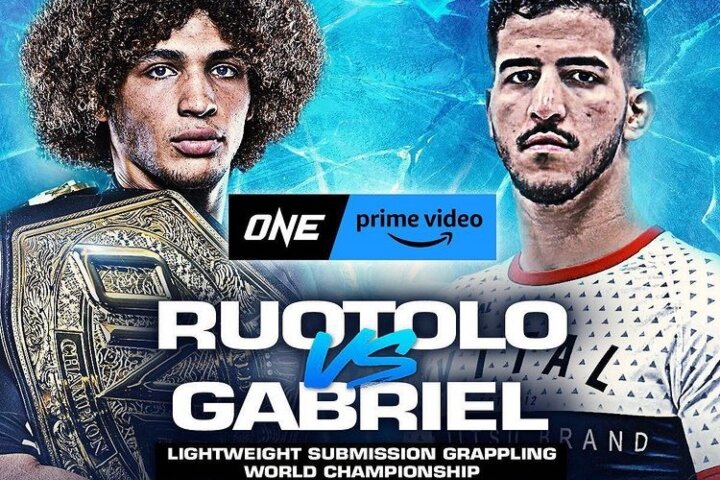 Kade Ruotolo has another chance to make history… As he’ll be the first athlete to be defending his submission grappling world title at ONE Championship!
He’ll take on Matheus Gabriel, a fellow BJJ black belt, on December 2.

Gabriel, representing the Checkmat team, is a dangerous black belt with a high submission rate.
Known as one of the top featherweights of his generation, he’s won the IBJJF World Championship title (twice), the IBJJF Pans Championship (gi and no-gi), and the IBJJF Brazilian Nationals.

Ruotolo, on the other hand, understands that he’s the “hunted” one rather than the hunter.
He explained why in a recent interview for ONE:

I feel like I’m the hunted rather than the hunter. I’ve always been looking after that number one spot, trying to get to the top, and now it kind of almost feels like I’m there.
I got a lot of hungry people coming after me. And that’s exactly what I want. So I can’t wait to face everybody.

And, needless to say, he’s confident in his grappling skills – including his defense:

I’m very confident in my Leg Locks and my counter abilities, and I don’t think anyone can really Leg Lock us [him and his brother, Tye Ruotolo] out there. At least Heel Hook us out there, for sure.

You know, even if I were to roll with Gordon [Ryan], I don’t think he can Heel Hook me. So mentally, I feel very confident in my Heel Hook defense.