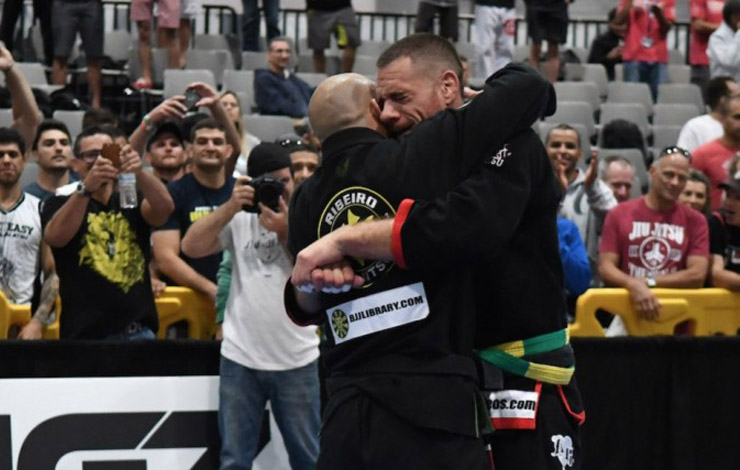 Today the IBJJF has announced a new rule regarding close out:

“The IBJJF would like to officially announce the new rules regarding closing out fights for the 2022 World Championships. There will be no cash prizes allocated to any athlete that closes out in their finals match of the World Championships. Furthermore, the athletes who close out will also forfeit their rank points for the event. Please keep in mind that the IBJJF has a disciplinary penalty already implemented regarding immediate double DQ. Here is article 6.1.5 in Disciplinary Penalties:When one or both of the athlete’s disregard the seriousness of the competition or perform actions simulating a fake combat.⁠”

Jiu-Jitsu’s stars talked to Tatame magazine about their opinion on the matter:

Rafael Mendes: he has already closed a few times with teammate Bruno Frazatto at the time they were both Atos. However, his mindset has changed:

” Bruno’s one of my best friends and always added a lot in my training and learning. He is a brother to me, but we met in finals together, and we ended up not fighting. We reflected on this and realized that we were devaluing the championship and hard work in training. The fact that there was no final in category devalued our achievement. Since then, we decided that we would fight, because only one is recognized as the champion, and that is the purpose of training. The fact that people say they will fight changes nothing. Nothing will interfere with our friendship, we just want to be as professional as possible so that our results are always recognized, and not devalued.”

Black belt GFTeam and collector of titles, Rodolfo Vieira disagrees with his countryman. For him, it makes no sense to face a teammate. Rodolfo believes that the clash between members of the same team would create an unnecessary rivalry and put the friendship at risk:

“To say that a person will fight with a friend, then he is not a friend. Brother fighting brother is normal in judo, but in Jiu-Jitsu, is an entirely different thing, it’s another philosophy. We’re not used to, it never was like that. I see no problem in ‘closing’, and could not fight my friends from workout, ever. If we come to a final of a major championship, or I would give the title, or we would come to an agreement. I think friendship is much further ahead than that. I am not in favor. Each has his thoughts, and mine is this one.”

“A lot depends on each one, how they train together, where they came from or where they go. I do not see Rafael Lovato fighting me because I’m his teacher. If it was the case of Olympic games, then, yes, we could fight. ”

“I find it interesting fight to see who was the real champion. Of course we try to make them face each other. I’m not against the fight. Is it legal to close in order to put two of each team on one side of the key. Now, when it comes in the end, have to fight you guys really see who is the champion, who is more technical. I, as a teacher, I know who is my best student, but sometimes it is a question of the public who have a right to know.”

“Of course black belts have to fight. I really don’t like that closing category business, this makes the event miss the brightness. MMA is different as it has punches in the face, but in Jiu-Jitsu, there’s no reason not to fight. If two athletes from the same academy reached the final, two deserve to fight for the chance to be champion. Without making the final, the athlete does not have the same taste champion, and everyone knows it … There is no top two”
⁠