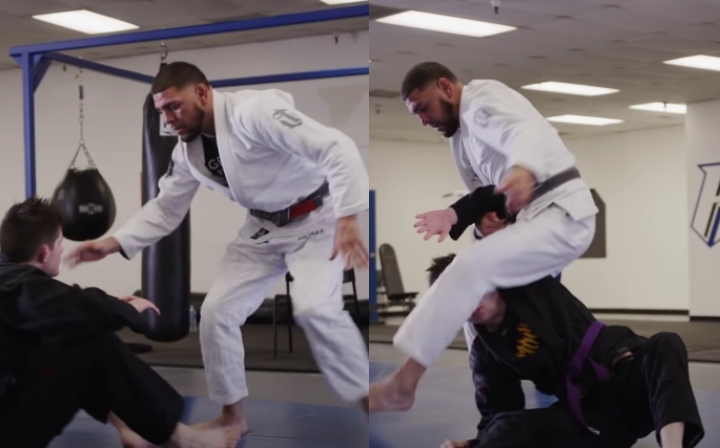 Nick Diaz will return to the octagon after a six year hiatus, on September 25 at UFC 266. He will face Robbie Lawler; an old foe, whom he first faced against at UFC 47 – 17 years ago, and defeated by knockout.

Diaz has been training very seriously for this fight and has been brushing up on his Jiu-Jitsu with his instructor Cesar Gracie.

Back when Nick Diaz was just a purple belt he faced the Brazilian MMA legend and BJJ black belt Jorge ‘Macaco’ Patino. Diaz back then shocked the grappling world when he tapped Macaco out with a rolling kneebar.

Around this time, after seeing Renzo Gracie in MMA, Diaz started training MMA under Steve Heath at the Animal House gym before starting BJJ and MMA at Cesar Gracie’s academy.

Diaz was promoted to black belt in Brazilian jiu-jitsu by Cesar Gracie on May 8, 2007.

In the latest UFC Countdown, we can see Diaz training in the Gi and teaching a great cartwheel guard pass to triangle:

You can see the sequence from 13:43 (Video is already time stamped) :