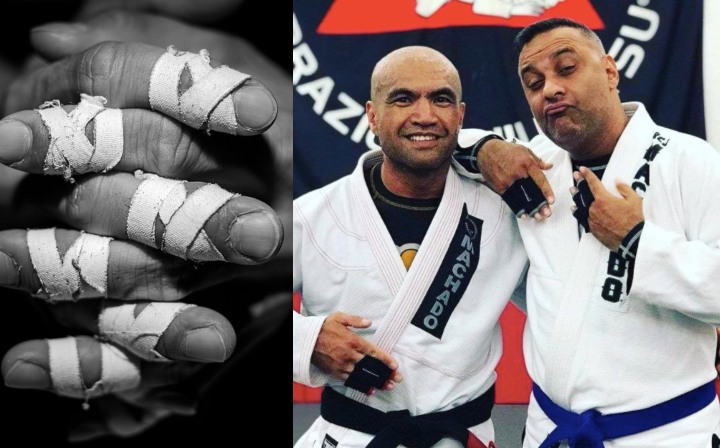 Finger pain is one of the realities Jiu Jitsu and most grappling practitioners face sooner or later, especially the ones that involve a kimono and thus the gripping aspect. It is that gripping that causes most of the damage.

If you decide to play Spider Guard / Lasso Guard or any other guard that is grip intensive, your fingers will pay the price sooner or later. Having thick fingers will delay the damage but you will still suffer finger pain, especially if you keep up with these guards. Paulo Miyao and Keenan Cornelius are only two of the elite competitors who acknowledged the pain they have in their fingers from the huge amount of grips.

BJJ Gear company Luta Gear has created the GRIPP TāP™ helps your grip by keeping your fingers adducted preventing finger injuries. For instance THE DOUBLE keeps two of your strongest fingers together which adds support and prevents any injuries from lateral motion. Flexibility and minimal interference was key to the design.

GRIPP TāP™ finger sleeves replace tape, supports your fingers, and keeps them safe. They are easy to slip on and off, and are easy to clean. With regular use, GRIPP TāP™ replaces a year’s worth of tape and saves you valuable training time.

Russell Peters on why he uses the Luta Gear to protect his fingers: