Most Common BJJ Warmup: A Big Risk For Knee Injury 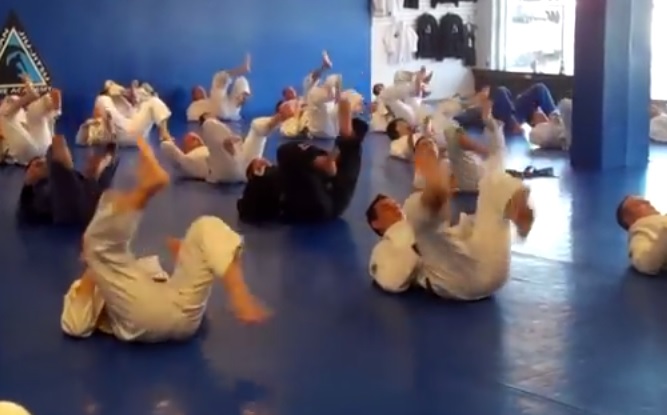 In most Jiu-Jitsu schools, one of the traditional warm-ups involves sitting down and pulling the foot in circles to ‘loosen’ up the ankle, followed by knee circles. (Knee circles are where you stand with feet together and try to move the knees in a circular motion first one way, then the other.)

Another one is standing up, joining your knees together and circling.

Both of these exercises put a lot of pressure on joints to move in ways they’re not supposed to go.

Terra Nova Fitness’s Chris Shah is one of the bay Area’s leading authorities on strength and conditioning for Mixed Martial Arts and running athletes. Shah believes that you shouldn’t stretch ligaments and tendons. Stretching joints like this increases risk of injury.

According to Shah, both examples of knee warm ups should be avoided. Think principles before methods. Meaning avoid any exercise that promotes knee flexibility.

Example : in essentially 100% of anatomy and rehab/ injury literature the primary importance of the knee,MCL, ACL is stability ( opposite of flexibility)

In essentially 100 % of peer reviewed studies of the knee,MCL and ACL valgus ( internal rotation, the exercises in video ) is described as the main mechanism of injury ( other examples being hyper extension and compression) Meaning the injury mechanism is essentially flexibility meeting force.

Doing this exercise standing is recreating the number one cited reason for ACL injury. Internal collapse of knee( valgus) you add that with no protecting torque and its promoting bad motor pattern. It’s your choice to do it. It’s hard for many in combat to suspend their beliefs becauase self value is tied to beliefs and certain exercises. Mastery promotes exploring where one is wrong or limited. I would en courage to suspend emotional investment in argument and research ACL/ knee injury literature. Again it’s your choice.

Next time you warm up, think of your knees and avoid any kind of exercises that do not overstretch the knee joint.