MMA Fighters With the Best BJJ 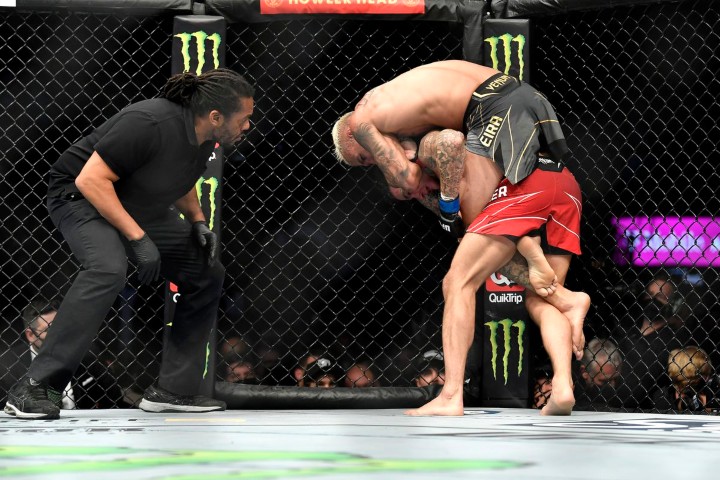 MMA is a complex sport that is made up of a lot of different components and factors. After all, when you look at the name mixed martial arts, it gives a pretty good indication that there is a mixture of different things here. MMA is the combination of several different martial arts under one universal ruleset. Boxing, kickboxing, muay thai, jiu-jitsu, wrestling, karate, judo, and taekwondo are all sports that help to make up MMA. This is one of the more interesting parts of MMA. These different sports mean that there are so many different styles and tactics deployed in fights. For example, someone who grew up boxing is going to fight completely differently to someone who has a wrestling background. This is where the phrase “styles make fights” comes from.

However, looking at one background in particular, you would have to say that BJJ is one of the most effective styles and backgrounds to have. You can be the best kickboxer in the world, but if you get brought down and put into submission, there isn’t too much you can do. This is why you have seen so many BJJ fighters have very successful careers in MMA. Of course, to compete in the sport, you need a well-rounded skill set, but if you have good BJJ abilities, then there is a good chance you will know how to finish the fight. But who are the best athletes in MMA in regards to their jiu-jitsu skills? These fighters could be losing a fight and, out of nowhere, pull off a crazy submission, something most of them have done. This means you likely don’t want to bet against them. If you want to bet elsewhere, lucky nugget is a great platform to do so. With that being said, here are the best MMA fighters in regards to jiu-jitsu skills.

There is a good chance that Demain Maia will go down for having the best ever BJJ skills inside the UFC. Although he lacked in the striking department, that didn’t stop him from getting finishes and winning fights. His BJJ black belt helped him to challenge for titles and beat contenders along the way. He will truly go down as an icon of the sport and an inspiration to all BJJ practitioners.

Brian Ortega got his nickname “T-City” due to his submission skills. Locking in some triangle chokes, it only seemed right to name him after the submission. Brian Ortega is an amazingly well-rounded fighter. However, he is most dangerous when given the opportunity to show off his BJJ skills.

The current lightweight champion has the record for most UFC submissions of all time. It’s safe to say that he wouldn’t have been able to do that without some great BJJ talents. The Brazilian is certainly someone that you don’t want to get tangled out with, as there is no doubt he will find your neck or a limb to make you submit.