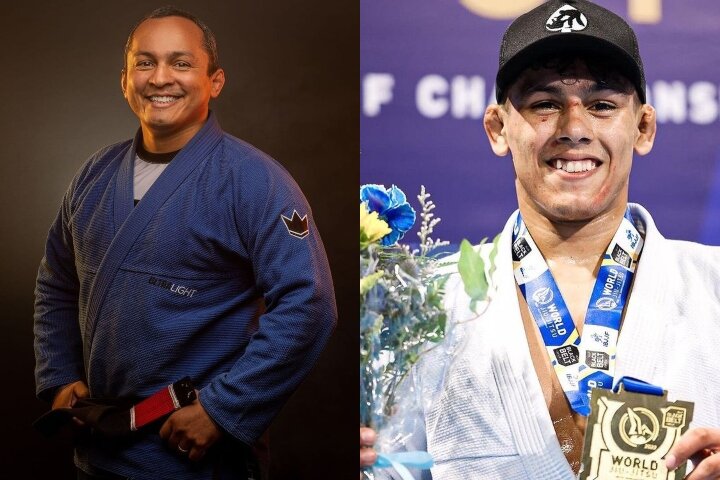 Mica Galvão is a brand new IBJJF lightweight world champion! He steamrolled through his bracket, facing and beating the all-powerful Tye Ruotolo in the finals. With him being just 18 years old and with all of his accomplishments so far, saying that Mica is a phenom is a great understatement.
His father, Melqui Galvão, understands what Mica had to do to get this far. He loves and respects his son:

[Others see Mica as] a skilled boy with a promising future who just won a BLACK BELT WORLDWIDE at just EIGHTEEN YEARS OLD. [But here’s] what I see: marks on the face, deformed ears, calloused hands and crooked fingers from so many wars fought.
A boy of incredible emotional intelligence who has been forged physically, mentally and spiritually since he was little. A boy who, at eighteen years old, still looks like a child in many things he does because he put his childhood aside to live a dream.

He expressed his worries about Mica’s happiness with the grueling training regime:

How many times have I wondered if he was happy doing what he was doing or if he just wanted to do it for his family? Does he like to train like that? We are on the right way? Is it right to let his childhood go by without enjoying how it can be enjoyed?

But Melqui is sure of one thing: Mica puts in the effort and is down to earth as he does it:

Mica carries with him the desire to help her family and several other boys. He knows the power he has to open doors and influence people and he handles it very well.
Everything with Mica is big, the victories, the defeats, nothing is small with him. Many want to be him but few would like to do what he did and does. Few could handle the pressure he carries.