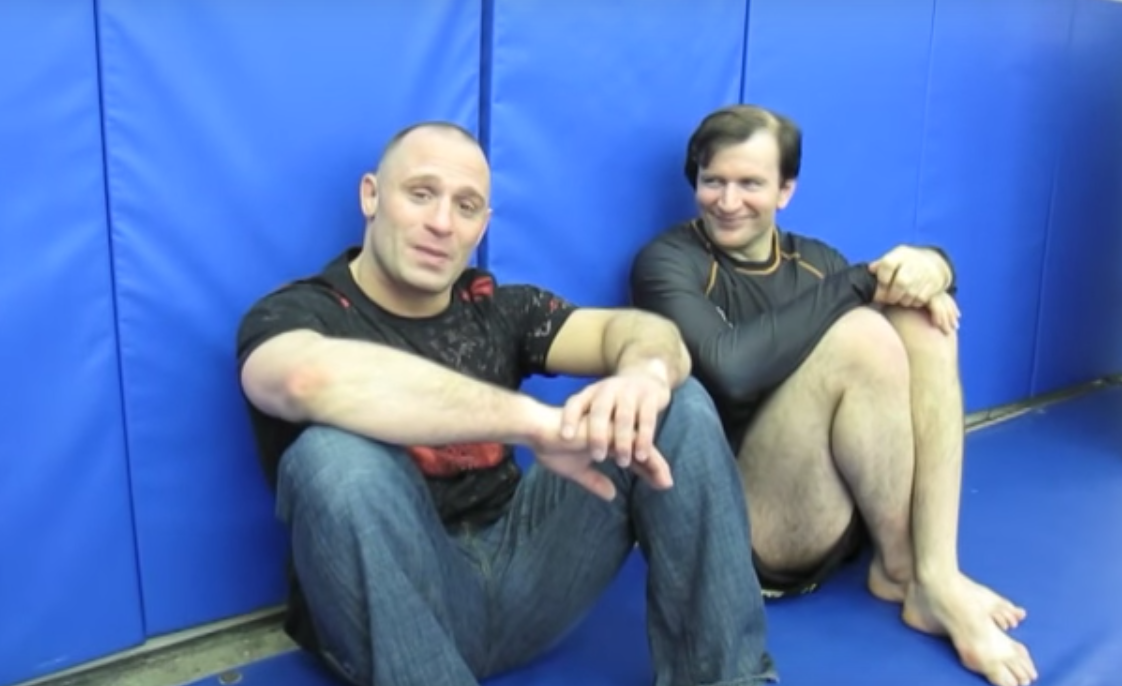 Matt Serra knew how much of a genius John Danaher was, long before he became well-known in the BJJ circles. Furthermore, the two have been good friends for quite a while as well.

Back in 2010 Mat Serra was getting married. One notable guest at the event was a longtime training friend John Danaher. However in this situation one of Danaher’s cooks came to light – he wears only rashguards and he wears them everywhere!

He even wore a rashguard when he was accompanying Georges St Pierre to the ESPYs!

In this video, Matt Serra tells the story of Danaher wearing a rash guard to his formal wedding (Time stamped at 6min 34secs):

Danaher has taken the time to answer the age old question:

Arguably the question i am asked more than any other has nothing to do with jiu jitsu. “Why do you always wear a rashguard?” First let me dispel a commonly voiced, but incorrect theory. It has nothing to do with fighting or being ready for fights. In my current physical state, an aggressive five year old could easily defeat me with a simple kick to the knee or hip or even a simple push – a rash guard isn’t going to save me! My reasons are purely practical. First, they are very comfortable, Second, they are easily washed and dried. Third, they are extremely low maintenance/wrinkle free/easily packed for travel etc. Fourth, being a low friction material, they are well adapted for wear under a jacket. Fifth, They enable me to comfortably demonstrate a technique in impromptu social situations to students. Sixth, they are warm in cold weather, yet cooling in hot summers due to wicking effects, and; if caught in rainstorm, they will dry in minutes even while being worn. Seventh, some clothing companies sponsor and support my athletes. I am proud to represent any company that supports my people. Eight, they are free as clothing companies are happy to see me wear their products. Nine, there is considerable variation in rashguard design that can vary from informal daily wear to more formal wear for dates/occasions. When it comes to comfort and utility and low maintenance, I have never seen an attire that can beat track pants, sneakers, rash guard and fanny pack. If i find something more comfortable in the future i will switch to that. It may not be aesthetically pleasing, but I am already rather ugly and odd looking so I don’t even bother with clothing aesthetics as my looks are a lost cause – if I had to rely on looks and charm for anything in my life I would be a homeless beggar already 😂😂. Now it’s time for a rash guard story that may change the minds of some of rash guard doubters out there…I am an admirer of the great MMA fighter Jose Aldo – any time he fights, I’m watching. The night he fought Uriah Faber, I wanted to see it. I don’t own a television, so I suggested to a bunch of my students that we go to a sports bar on the upper east side of Manhattan and watch it live. As always, I was running a little late and came in wearing my usual attire and began looking around for our table. Now my students and I actively seek out every opportunity to prank/ridicule/make fun of each other, my general weirdness gives them lots of raw material to work with! The entire group of them had dressed in rash guards and Fanny packs! As I sat down there was a noticeable look from pretty much the entire bar as they all simultaneously asked the question, “who the f**k are these dorks and why are they dressed in those gimp outfits?” We all started laughing and started to watch the show. Out of nowhere groups of women started up to our table and started asking who we were and why were we dressed like that? Were we a sports team? Cyclists? Triathletes? Lunatics? Morons? Suddenly our table was neck deep in curious babes and hotties and the Jose Aldo fight was forgotten 😂😂Every single one of my students got multiple phone numbers and action out of that escapade! (I was the only failure 😞😒😂😂) The dudes at the bar were furious and could not understand how a bunch of dorks in wet suits who looked like they had beamed down from the deck of the starship Enterprise had gotten all the female attention 😂😂 So, who knows…maybe you doubters ought to give it a try…my rash guard system worked as well for my students as my leg lock system…perhaps it can work for you too! 😂😂