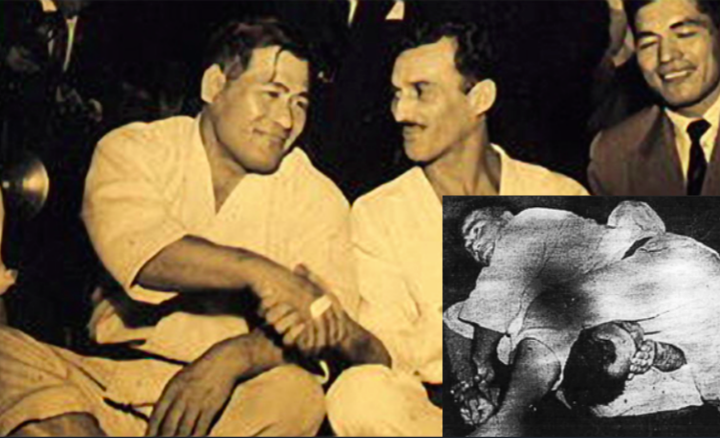 He wrote this excellent piece on his Judo story. This excerpt from the book “My Judo” was translated from the original Japanese by member pdeking (edited for spelling by Neil Ohlenkamp) . “My Judo” was written in 1984 and was first published on Jan 31, 1985. It is no longer in print. judoinfo.com also published parts of the book. Here is Part 2. (CLICK HERE for PART 1) and (Here for Part2).

In 1949, after winning multiple fights against boxers, wrestlers and savate fighters in Europe, Kimura and his troupe formed by judoka Toshio Yamaguchi and Yukio Kato went to Brazil after an invitation by Hélio Gracie of the Gracie Jiu Jitsu.  Gracie challenged them to a match under what would be known as the “Gracie Rules”, in which throws and pins would not count towards victory, with only submission or loss of consciousness. This played against judo rules in which pins and throws can award someone a victory, but they accepted nonetheless. Kato was the first to accept the challenge, drawing with Hélio Gracie in their match at the Maracana stadium. However, he lost to Gracie by gi choke in the rematch at the Ibirapuera in Sao Paulo. Hélio proposed to continue with the challenge, and Yamaguchi appointed himself the next to fight. Kimura, however, volunteered to fight in his place.

The bout between Gracie and Kimura took place again in the Maracana stadium, before an audience of 20,000 people, including president of Brazil Getúlio Vargas. Expectation was such that, according to a source, Kimura had been warned by the Japanese embassy that he would not be welcomed back in Japan if he lost the match. Kimura was received in the arena with raw eggs and insults by the Brazilian crowds, and the Gracie challengers brought a coffin to symbolize Kimura would be dead, just like they had done with Kato. At the start of the match, Hélio tried to throw him down with osoto gari and ouchi gari, but Kimura blocked them and scored multiple throws by ouchi gari, harai goshi, uchi mata and ippon seoi nage. However, Helio Gracie was able to perform ukemi thanks to the soft mat used in competitions, so Kimura couldn’t subdue him by throwing alone. The judoka started planning a way to win between throw and throw, and at about the ten minute mark he took the fight to the ground, pinning Gracie with kuzure-kami-shiho-gatame. After a number of holds by the Japanese, including kesa-gatame, sankaku-jime and do-jime, the Brazilian looked unable to breathe under Kimura, but he persevered, until he tried to switch position by pushing with his arm. At that moment, Kimura seized the limb and executed gyaku-ude-garami. Hélio did not surrender, and Kimura rotated the arm until it broke. As Gracie still refused to give up, Masahiko twisted the arm further and broke it again. Finally, when the judoka was about to twist it a third time, Gracie’s corner threw the towel, and Kimura was declared winner. A crowd of Japanese came and tossed Kimura high in celebration, while Hélio’s arm was treated by doctors. As a tribute to Kimura’s victory, the armlock technique he used to defeat Gracie has since been commonly referred to as the Kimura lock, or simply the Kimura, in Brazilian Jiu-Jitsu and, more recently, mixed martial arts circles.

The match, however, is not devoid of controversy. Contrary to popular belief, Kimura never claimed that he would consider the match a loss if Helio lasted more than three minutes with him, something which was probably misattributed to him by Brazilian press. Also, there have been talks of the match being carried or worked to a point: Kimura’s training partner Georges Mehdi, who witnessed the fight, claims that the two contendants played loosely for most of the first part of the match,  and in a 1994 interview with Yoshinori Nishi, Helio Gracie himself admitted that he had been rendered unconscious very early in the bout by a do-jime before Kimura released the hold and continued the bout. Finally, the weight difference between the two fighters is another point of doubt. Gracie sources often list Kimura as being heavier than Hélio by 36 kg (80 lbs),  though the real difference has been estimated by a minor 10 kg (22 lbs), while Kimura’s autobiography lists it as just 8 kg.

“After I returned from Hawaii, I went to Brazil by the invitation of Sao Paulo Shinbun (Note: local Japanese newspaper company in Sao Paulo). Sao Paulo Shinbun, which was in a slump, came up with an idea of doing pro wrestling to revive their business. The period of contract was 4 months. The participants were I, Yamaguchi, and Kato 5th dan. This enterprise was a big success. Wherever we went, the arena was super-packed. This made Pres. Mizuno of Sao Paulo Shinbun very happy. When we asked for a pay raise, he tripled our original pay on the spot. In addition to pro wrestling, we gave judo instruction wherever we went.

One day, Helio Gracie, judo 6th dan, issued a challenge to us. The rule of the bout was different from that of judo or pro wrestling. The winner was decided by submission only. No matter how cleanly a throw is executed or how long Osaekomi lasts, it does not count. He issued a challenge to Kato 5th dan first. The gong rang. Kato was in good condition, and threw Helio a number of times. However, past 15 minute mark, I started to see frustration in Kato’s face. The throws had no damage on Helio since the mat was soft. At 30 min mark, it was evident that Kato was tired. “What’s the matter, Kato, go to Newaza, don’t stand up!” Japanese audience yelled. Kato then threw Helio down by O-soto-gari, mounted on Helio, and started Juji-jime. The audience roared with excitement. But, as I watched carefully, Helio was also applying a choke from below. They were trying to choke out each other. This lasted about 3 or 4 minutes. Kato’s face started to turn pale. I shouted, “Stop!” to the referee, and jumped into the ring. When Helio released his hands, Kato collapsed onto the mat, face first. Two days after this bout, I saw Helio’s students marching down a city street carrying a coffin. They were shouting, “Dead Japanese judoka Kato is in this coffin. He got killed by Helio. We ask your support for Judo Master Helio Gracie!”

After this bout, the popularity of our pro wrestling show declined rapidly. The Japanese whom we encountered on the street murmured, “They must be phonies, losing in such a pathetic manner.” Helio issued another challenge, this time to Yamaguchi. Pres. Mizuno of Sao Paulo Newspaper also begged, “Mr. Yamaguchi, please kill Helio, this time.” But Yamaguchi seemed reluctant, and asked “Let me think for one night.” If he fought a judo match under the Japanese rule, Yamaguchi is superior to Helio both in Tachi-waza and Newaza. But under the Brazilian rule, if Helio got pinned on the ground, all he has to do is to stay calm and be cautious not to get caught in a choke or joint lock, and remain still till the time runs out. Helio could fight to a draw in this way. If he used this tactics, it would be difficult for Yamaguchi to make Helio surrender. I then said to Yamaguchi, “Do not bother to come up with a plan to make Helio submit. I will accept the challenge.” Until the day of the bout, we continued pro wrestling shows every other day. 3 days before the bout, local newspaper had a big headline, saying “Kimura is not a Japanese. He seems to be a Cambodian. Helio cannot fight a fake Japanese.” I was surprised to see it. I rushed to the Embassy of Japan with my passport, and got a proof that I am a Japanese.

20,000 people came to see the bout including President of Brazil. Helio was 180cm and 80kg. When I entered the stadium, I found a coffin. I asked what it was. I was told, “This is for Kimura. Helio brought this in.” It was so funny that I almost burst into laughter. As I approached the ring, raw eggs were thrown at me. The gong rang. Helio grabbed me in both lapels, and attacked me with O-soto-gari and Kouchi-gari. But they did not move me at all. Now it’s my turn. I blew him away up in the air by O-uchi-gari, Harai-goshi, Uchimata, Ippon-seoi. At about 10 minute mark, I threw him by O-soto-gari. I intended to cause a concussion. But since the mat was so soft that it did not have much impact on him. While continuing to throw him, I was thinking of a finishing method. I threw him by O-soto-gari again. As soon as Helio fell, I pinned him by Kuzure-kami-shiho-gatame. I held still for 2 or 3 minutes, and then tried to smother him by belly. Helio shook his head trying to breathe. He could not take it any longer, and tried to push up my body extending his left arm. That moment, I grabbed his left wrist with my right hand, and twisted up his arm. I applied Udegarami. I thought he would surrender immediately. But Helio would not tap the mat. I had no choice but keep on twisting the arm. The stadium became quiet. The bone of his arm was coming close to the breaking point. Finally, the sound of bone breaking echoed throughout the stadium. Helio still did not surrender. His left arm was already powerless. Under this rule, I had no choice but twist the arm again. There was plenty of time left. I twisted the left arm again. Another bone was broken. Helio still did not tap. When I tried to twist the arm once more, a white towel was thrown in. I won by TKO. My hand was raised high. Japanese Brazilians rushed into the ring and tossed me up in the air. On the other hand, Helio let his left arm hang and looked very sad withstanding the pain.”