Marcus Buchecha On His Training For the Pans, Doping Controls, & His Participation In ADCC. 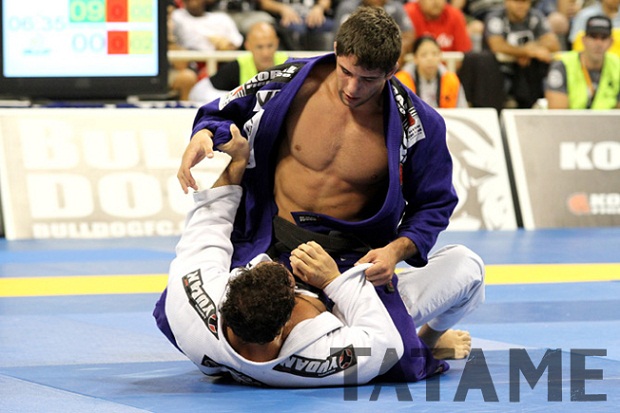 Source: Translated from Portuguese from Tatame

Current weight and absolute world champion, Marcus Buchecha has already confirmed that he will be at the Pan Americans, where he also won weight and absolute in 2012. The competition is the first in Jiu-Jitsu to take doping tests, and the current champion is available for the test, and wants more.

“If the choice is by lottery, there is no sense. Nobody is interested in whether the athlete who lost in the first round of the championship is using something. For me, all finalists of adult black belt has to be tested. I as absolute world champion, am available to be the first to be subjected to the test on the day of the championship, a month earlier or a month later, “said the fighter.

Check out the full chat with Buchecha, who spoke about doping, MMA and not waiting to receive an invitation from ADCC.

You will defend his title at this year’s Pan. How is the training in the United States? What’s new?

Yes, I will fight and defend my title again. Training is great and Lucas Leite is running this camp for the gang. We do not have much news because a team that is winning doesn’t change much (laughs). We are keeping the same line of training as last year, and I’m training hard with my physical trainer Tony Gonzales, who is helping me a lot since last year.

What did you think of the initiative to implement the doping testing? What do you believe you can change with this decision?

I found this to be a great initiative as it shows a great evolution in the sport. I remember when the Worlds came to the United States in 2007, many people complained, criticized, but ultimately, if it were not so, we would be fighting today in gyms with poor conditions in Brazil. The doping is the same thing, they are complaining, but this shows the growth of our sport. Of course athletes using illegal substances are complaining and very concerned about this, as it will be very ugly for athletes who fall on the exam.

You believe you have a lot of people doing drugs in Jiu-Jitsu?

I think that athletes use at the top yes, but now we will find out from this Pan And I agree that the tests are expensive, but if the choice is random, there is no sense. I guess no one is interested in whether the athlete who lost in the first round of the championship is using.

What is your suggestion?

For me, all finalists of adult black belt have to be tested, and I as absolute world champion, will be available to be the first to be subjected to the test on the day of the championship, a month earlier or a month later.

With respect to ADCC, will you participate? Have you received invitation? Do you feel ready to shine in the World Cup Grappling?

Regarding the ADCC, this is one of the competitions that I always had the dream to fight, but never had a chance, because I live overseas since 2010 and never could participate in national trials. And also I never received an invitation from the organization. I think today I can say that I’m much more mature and ready for this competition. I am now 100% focused on the kimono, but soon after the World Cup, I’ll begin training for competitions without kimono and the expectation is quite large for the ADCC.

What are your main goals for 2013 and how do you plan to reach them?

In 2012, I had a very good year, and I plan now to follow the same steps. First I got a trial for World Pro Abu Dhabi and following that I’ll defend my titles in the Pan, World Pro and World. Then I will make a tour of seminars in Europe and the U.S. and go back to California to focus on training no gi.

Are you still training your striking? Do you already have plans to put the MMA gloves on?

I had to take a break in training, because I’m focused on the kimono, but whenever it is off-season competition, I’m training and learning more about other sports. But I still think I can achieve much more in Jiu-Jitsu, because despite the good results, I have less than three years as a black belt. I can still mature more before moving to MMA.