Making The Arm Drag Your Number One Move in BJJ 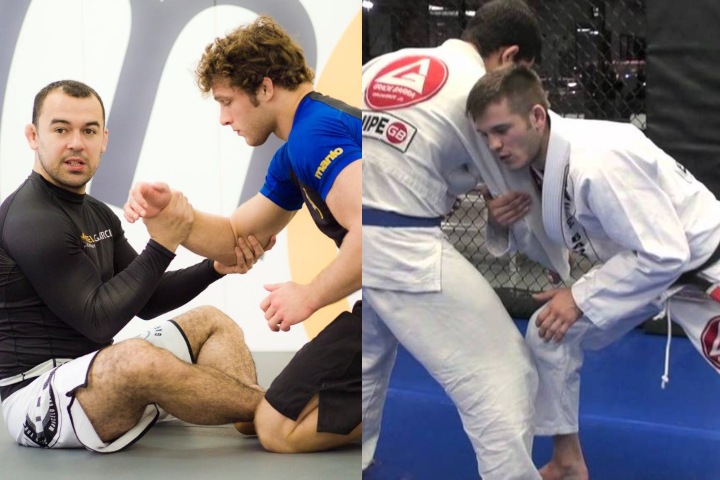 Arm drags serve a purpose beyond pulling an opponent’s arm. Where the arm goes, the body should follow. As seen in amateur wrestling, dragging the arm with deliberate intent at the desired angle and with the appropriate strength manipulates the body, creating possibilities for a preferred move. When facing an opponent during standup, for example, an arm drag could break his/her balance and disrupt posture, making it possible to hit different takedowns, or at least attempt them.

Arm drags also work well in Brazilian Jiu-Jitsu, and a standup face-off isn’t the only time BJJ players can use arm drags. Arm drags prove valuable from numerous positions. If you can get a hold of the arm and pull it effectively, you have an arm drag.

Often, the simplicity and effectiveness of an arm drag makes the move a reliable technique. Even if an arm drag technique doesn’t work 100% as demonstrated in class, it usually forces a defensive reaction. Defensive reactions come with limitations, and solid arm drags could “bully” someone off his/her preferred game.

Arm drags have numerous benefits, and they can come into play far more times than someone might think. Look at how well arm drags work inside the closed guard.

Arm drags could come into lay often in the closed guard. An arm drag that pulls an opponent’s right arm to the guard player’s right side, combined with the guard player’s elbow/hip escape, creates a path to take the opponent’s back. Even if the attacker can’t reach the back, the opponent remains in a vulnerable and defensive spot. Getting stuck “half-way” to the back still affords options for collar chokes and more.

Many BJJ practitioners may be using variations of an arm drag routinely without realizing it. When performing a spinning armbar from the closed guard, an arm drag could lend the move an assist. Executing an armbar without a corresponding arm drag is possible, as seen when high-caliber players perform spinning armbars by solely using their legs. The “average BJJ player” usually has to grab and secure the arm, though. Anyone who does so and pulls the arm across the centerline to hit the spinning armbar may be “borrowing” an arm drag principle.

Grabbing someone’s arm and pulling it across the centerline to execute a spinning armbar represents a straightforward technique, but one that won’t likely work so efficiently when faced with resistance. The opponent will usually see it coming and could use a “re-drag” (a counter arm drag) or raw strength to counter the armbar attempt.

“Assisting” the arm drag could lead to better results. Using the legs to trap the arm and break down the opponent’s posture while controlling the shoulder could put him/her in a disadvantageous position. Gripping the arm near the elbow and slightly dragging off-center could increase the chances of performing an armbar or provoking a defensive reaction. Once again, defensive reactions could create vulnerabilities. Attempts to protect the arm may open a door for a sweep.

Arm drags may even work as counters to a pin escapes. Effective elbow escapes allow someone to gain the necessary distance to put someone in the guard. Arm drags could inhibit that movement, at least partially. Using an arm drag could keep the opponent from getting enough space to go to full guard upon losing control of a side control pin. The arm drag might force an opponent to go to a half-guard instead.

The half-guard might be “fine,” but not the opponent’s first choice. So, pulling someone back or holding them partially in place with a decent arm drag (one that doesn’t expose the arm to attacks) could force the opponent away from an “A” game to a “B” game. That’s progress.

Arm drags from the guard to hit an armbar or take the back are commonplace. Using them to counter pin escapes may not be as prevalent, but still workable. Not so recognizable might be an arm drag applied on a “far-arm armbar” attempt from the top of the side control. Being less recognizable, however, doesn’t mean it isn’t there.

The Far-Arm Armbar from Side Control: Adding the Slight Drag

The classic drill is a familiar one: the BJJ player on the side control top “captures” a training partner’s far arm with his/her arm. While hugging the trapped arm, the top player “walks” in a semi-circle to the opposite side control, turning the partner onto his/her side, and performs an armbar. Training the drill may involve allowing the partner on the bottom to resist or try to escape.

Finishing the armbar against resistance requires keeping the person on the bottom from escaping, so maintaining a pin and control while moving becomes essential. Of course, other options are available, such as abandoning the armbar and going for a north/south pin and corresponding collar choke. Still, the opponent may escape from the bottom if you lose the pin control. And preventing an escape stands as a top priority no matter what you do, and the previously mentioned arm drag elbow/escape prevention may prove helpful.

Maintaining the pin and keeping the person on the bottom from escaping doesn’t mean he/she won’t get the arm out of trouble. Pulling the arm free and establishing posture on the bottom may not be an escape, but the arm is now safe. Perhaps adding some slight arm drag-style pulling pressure, combined with a decent pin, could make it harder to free the arm. And the arm drag may do even more.

Merely holding and hugging the arm while maintaining a tight grip may keep the limb in place. Adding a slight drag, however, could extend control beyond just the arm itself. By utilizing greater pulling motions on the arm, there’s somewhat of a control effect on the body, at least to a degree. The pulling could move the body into a slightly tougher position to escape, as noted earlier. Making things a little more difficult for an opponent has value, as “a little” can mean “a lot” when inches and seconds count.

Pressing Instead of Dragging on the Far-Arm Armbar

Pulling and pushing go together, and sometimes pushing, pinning, and pressing the “dragged” arm becomes necessary.

Pushing on the arm is the opposite of dragging/pulling, but the action could help keep someone under control when going for the far-arm armbar. When unable to use the body to perform a full pin on the upper torso during the transition from the side control to north-south to the opposite side control, driving the opponent’s arm into the shoulder or chest could momentarily hold the position. Consider it a partial pin on the shoulder.

Again, the idea here involves slowing down defensive movement and inhibiting creating space, which may cut short an escape. As with dragging, pressing has many possibilities.

Relying on the Arm Drag

Many things come into consideration when working on any type of arm drag. Skill is one. The need to make adjustments for a particular game or body type is another. On the most fundamental level, dragging (or pressing) an arm could be versatile and valuable with the right amount of practice.

(For informational purposes only. Always train under the supervision of a qualified instructor and at your own risk.)