Make Your opponents Fly With The Meregali Sweep 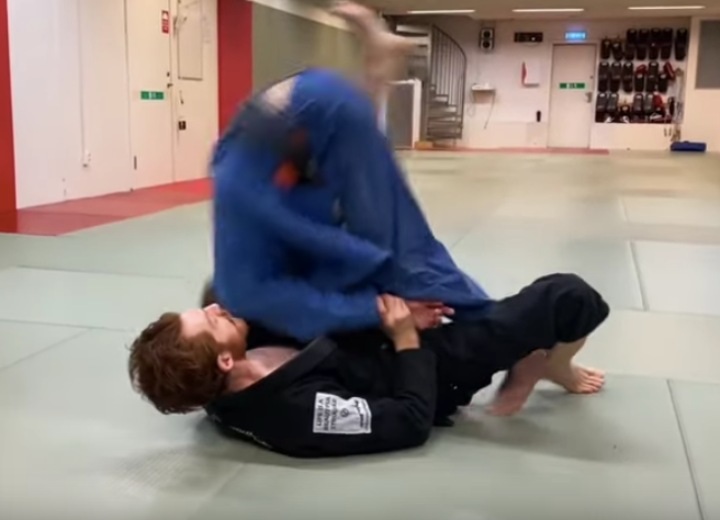 Nicholas Meregali is a 2x IBJJF World Champion, loved for his constantly dynamic and aggressive BJJ game. One of the aspects of that game is his great Open Guard – and one of the sweeps from Open Guard that he popularized is the so-called Meregali Sweep.
Jon Thomas, a black belt under Master Romero Jacaré Cavalcanti and Lucas Lepri, gives a breakdown of this sweep and shows his favorite variations.

The basic idea of the Meregali Sweep, Jon explains, is in getting a deep Lasso; where your foot goes under your opponent’s backside in order to bump them overhead.

Starting his first setup from the far side collar-sleeve position, Jon breaks down the Sweep:

1) Jon places his foot on his training partner’s bicep muscle.

2) He grabs his partner’s collar on the same side where his sleeve grip is.

3) Once in this position, your opponents will probably place their far leg backwards a bit and bend their front one, to establish better balance. They will also likely frame on your ribs with one of their arms – which, all together, makes it difficult to attack their far-side leg.

4) Because of that, Jon switches his cross-collar grip to the same side collar grip.

6) Jon pulls his other leg out, shooting it deep in-between his training partner’s legs for the Lasso – and locks his foot under his partner’s tailbone.

7) Then, he pulls his “De La Riva foot” out, taps it to the floor and pulls himself into his partner, centering up with him as well.

8) Using that foot and pushing with the other one, he drives off the floor and elevates his partner.

9) To prevent opponents from posturing up, Jon says to use your elbow in order to block their hand.

But, what if your opponent steps in with their far leg, squaring up with you? This makes it difficult for getting the De La Riva hook in and for pushing their hip out.
That’s when Jon’s second variation comes into play: the double sleeve one.

1) Gripping both of your opponent’s sleeves, get the De La Riva hook on their opposite leg.

2) Place your other foot underneath your opponent’s tailbone.

3) Your De La Riva foot taps the floor – pulling you in towards your opponent, while also shrimping you so as to center up with them.

4) Bump them overhead, while keeping their arms tucked in.

If it’s tough to sweep them from here, Jon shows that you can use your other leg to kick them in their backside and gain bonus sweeping power.

BAD ANGLE? NO PROBLEM – GIVE THIS VARIATION A SHOT!

The third variation is the one which Jon has made up himself. He says that he uses it when his training partner places his front leg a bit forward – making it difficult to do the Meregali Sweep from there, due to a bad angle. To solve this, Jon follows the following steps:

1) He grips the second sleeve. If his partner hides that grip, however, then he butterfly-hooks his leg in order to grab his pants and then pulls himself close to him.

2) Jon removes the hook and pushes his partner’s hip.

3) He pulls his hip in order to center yourself.

4) Then, he places his leg in-between his partner’s, hooking the foot under his backside.

5) Jon removes his grip from the pants.

6) Pulling his training partner into the sweep, Jon catches his arm in order to prevent him from posting.

Watch the video below to see more of Jon’s amazing details for making the Meregali Sweep work for you!