Lost Your Job Because of Coronavirus? Rener Gracie Has a Brilliant Solution 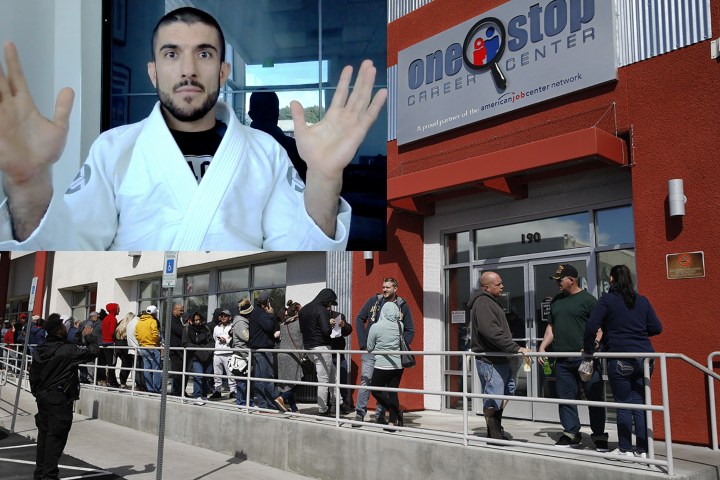 As the World is battling the new Coronavirus, 6.65 million people have filed for unemployment benefits in the US last week, due to the devastating economic impact of the lockdown and border closing on the economy.

The US labor department has announced that a record number of people sought benefits becoming unemployed after 27th of March. Unemployment offices became overcrowded with the overwhelming number of claims around the world.

Now the total number of unemplyement claims in the US is 9.95 million. A scary statistic: more people have filed for unemployment in the last two weeks than filed in the last 10 months…. Let that sink in.

The question is, how many of those 9.95 million unemployed people are Jiu-Jitsu practitioners?

Rener Gracie of Gracie University came up with a brilliant idea:

He is offereing a Gracie intructor certification program online.

It doesn’t matter what your rank or affiliation is, if you’ve EVER dreamt about teaching jiu-jitsu, Rener will help you and certify you.

Gracie University has 169 Certified training centers wordwide, many of the instructors are just blue belts.

Rener alsways has good business ideas. Earlier this week he launched ‘FitJitsu’, a blend of fitness and Jiu-Jitsu, for those that cannot train at the academy:

Are blue belts capable of being good instructors and successful business owners? Many may answer no, and that they don’t have sufficient experience. This was not the case for Johnny Vasquez a Gracie Jiu-Jitsu purple belt who back when he was a blue belt opened his academy ‘Gracie Jiu-Jitsu Apple Valley’ and was able to enroll 350 students in just 3 years Johnny was even surrounded by many BJJ black belt instructors…