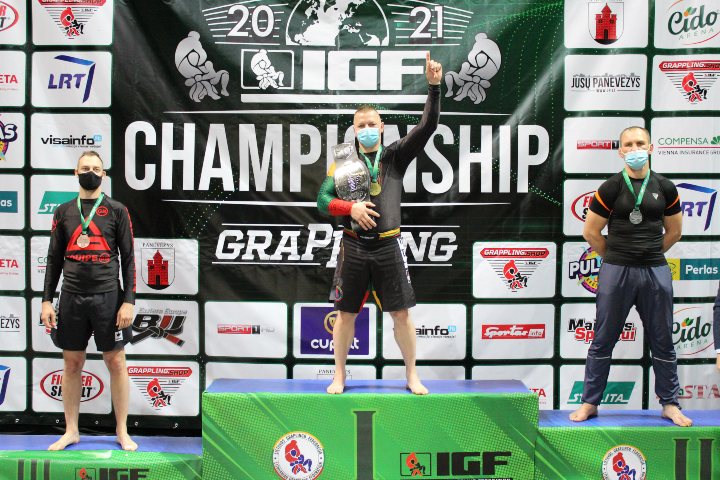 At the second IGF World Grappling Championship held in Panevėžys CIDO Arena over the weekend, Lithuanian fighters left no hope for their competitors from foreign countries. In the discipline without a kimono, they won as many as five champion titles in six weight categories in the main men’s group.

“The goals have been met beyond our expectations. I think we have proven once again that Lithuanian grappling is moving in the right direction. The most important thing is to keep on doing it” says Adrijus Kupstas, President of the Lithuanian Grappling Federation.

Twenty months ago, representatives from twenty countries registered for the championship, but the situation with COVID-19 in the world has significantly melted this number. However, participants from distant Algeria or Azerbaijan could also be seen on the tatami.

“Despite the fact that it was the second world championship, questions arose during its preparation much earlier than three years ago. Of course, most of them were related to the pandemic situation in the world. When things change in different countries almost every day, it was almost impossible to predict the flow of participants even when there were only a few days left before the championship.

“114 participants gathered for the championship. I think in such conditions it is a fantastic indicator. In general, in terms of organisation, the championship was of the highest level,” commented A. Kupstas.

In the group of masters in Nogi and Gi disciplines, Kęstutis Smirnovas, representing Šakiai sports club “AUDRA”, defeated everyone and became the champion. Latvian athletes Guntis Gruzninš and Oleg Voronovs became champions in other categories.

Lithuanian representatives won three more belts in the discipline with a kimono. Unbeatable in their weight categories were: Konstantinas Mokšinas, Albertas Kašėta and Robertas Valančius. Latvian Janis Tilibs-Etikis and Belarusian Sergejus Kananovičius became the champions together with them.

You can find more information by visiting www.grapplingfederation.com