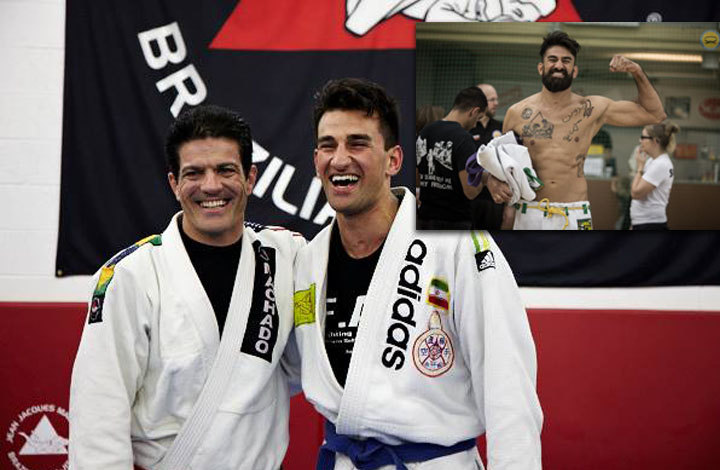 Anosihrvan Parvazi has a unique story. Back in 2005 he had the misfortune of being in an accident that beheaded his best friend and left him severely burned. Here’s how the accident happened in his own words:

“In 2005 I was in an accident and got burn marks on the half of my body which left me with a lot of disabilities. And I lost a lot of hope to continue with my martial arts that I’ve been doing all my life. When I heard about Jean Jacques Machado he was actually an inspiration for me. Made me start jiu-jitsu which I never heard about before…

It was 13th of November in 2005 in Sweden. Me and my best friend, we were outside and went jogging and stopped by near the train yard, pretty close to it near where we grew up. It started to rain and we were on the trains and just hanging out. It was a very common place to hang out at that time. The rain made the magnetic field very sensitive so it threw lightnings at us. Each lightning has 16000 Volts, there were 4 lightnings and they went through my body down to my right side and down to the train and upto him and beheaded him. “

Anoshirvan’s trouble doesn’t stop there – he was declared dead for 4 minutes.

“4 minutes. And I was in the hospital for about 2 years before that. I had surgeries. After I woke up from the coma I just wanted to go home. “

These challenges didn’t hinder Mr Parvazi in wanting to compete. Here’s his competition match as a blue belt:

“I was in 2 comas, the real one was for about 27 days. And then there was one where they put me to sleep a longer term- almost 8 months. “

Upon waking up it took a little bit to get back into training. Everything had to be re-learned. It was important to not let the body rest too much so it wouldn’t get lazy.

And he’s made it to purple belt!

Mr. Parvazi credits jiu-jitsu with helping him deal with many issues including ptsd, suicidal thoughts and more:

“This accident happened to us in 2005, and after loosing my best friend and still till this day spending time in hospital, I can say that the only thing that has really pushed me away further from suicidal thoughts, is Jiujitsu.
So, it would make me really happy if at least one person can get help from this article.
If one person, who is suffering from a challenge in life, can get a little “up” from this article, than it feels better for me to be more open about my accident to more and more people.
As always, I’d like to thank my rolemodels around me.
First of all Jean Jacques Machado.
Without your support I wouldn’t be alive today. Extra big thanks to Sensei Jay Zeballos for always being there!
Sensei Fabio Clemente, together with Babs Olusanmokun, for giving me a home, a dojo, a huge family, trusting me with helping to teach classes, letting me compete for them, and trusting me enough to give me a purple belt.
And the one and only Renzo Gracie, or as I call him “Tio Gordo”, for always giving me a huge smile!”

Check out the video attached below to listen about the rest of this extraordinary jiu-jitsu journey!

But it’s far from it all being challenging, just this past month Anoshirvan Parvazi  had the pleasure of meeting Demian Maia!