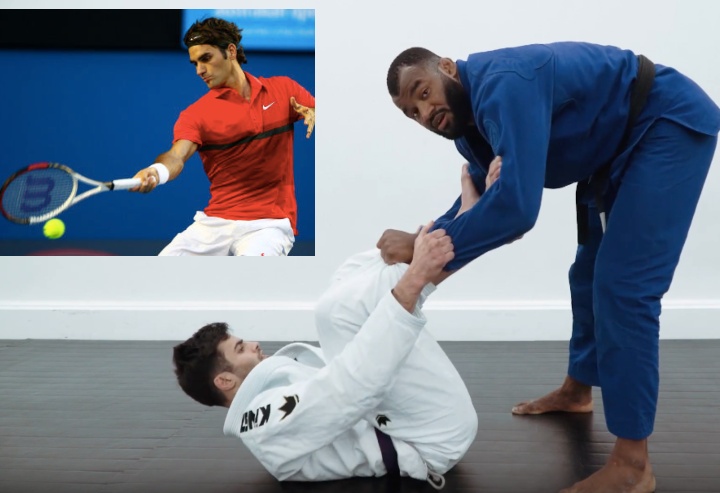 Guard passing never gets boring, right? You might, actually, prefer doing it in the Gi because of all of the available options… Well, in that case, we have prepared a great surprise for you!
Jackson Sousa, a BJJ black belt under Rico Vieira and two times IBJJF No Gi World Champion, explains how to do one of his favorite Open Guard passes in the Gi: the so-called Tennis Pass!

GET THE PROPER GRIPS – ONE IS ENOUGH!

Jackson starts off by saying that, when you want to pass your opponent’s Open Guard, chances are that they won’t always be lying on their back, but that they will often start off from a seated guard position. That’s why, Jackson explains, it’s his goal to get his training partner’s back to the mat from this seated position.

PUSH THE LEG AND FIGHT OFF YOUR OPPONENT’S DEFENSE

After he has established the grip, Jackson extends his arm in order to throw his training partner’s leg to the side, thus making room for guard passing on the opposite side. From there, Jackson explains, two things can happen: either your opponent won’t react and you will be able to transition to a dominant position, such as North South. However, what will happen most of the times is that your opponent will bring his other leg over to your hip, in order to stop you from passing.

Jackson demonstrates what you need to do in that case. He lowers his level and then changes the grip on his training partner’s pants to his second hand. Then, he uses his elbow to remove the partner’s foot off of his hip, and connects the hand (the one on the same arm as the fore-mentioned elbow) to his partner’s thigh.

GET THE TENNIS PASS

Watch the video below in order to see Jackson Sousa explain and demonstrate the Tennis Pass in phenomenal detail!