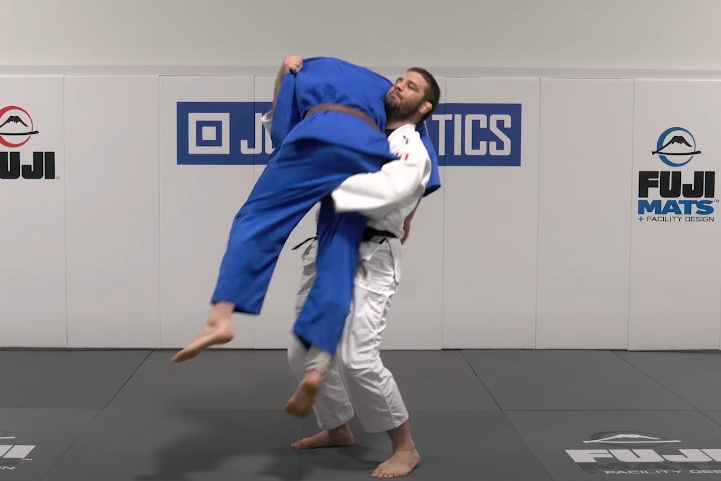 You know the saying: „Old school is the best school!“ And while that may not be true in every single case, it most certainly is the truth in the majority of them; including not just the ground game in BJJ, but stand up as well… Especially in regards to the Judo throws!
In this instance, Travis Stevens demonstrates and explains one of the best old school Judo throw techniques out there – the Te Guruma.

Travis begins by saying that the Te Guruma is one of his favorite throws, ever since he made his first Olympic team in 2008 and when he had a lot of success with it on the international podium. Now, there are a lot of variations in regards to how you’re going to go about this throw; so Travis explains that he will elaborate only about the entry-level technique.
The way he has always set it up is by first gripping the opponent’s gi over their shoulder, then elevating the opponent’s arm on the opposite side in order to step in towards him. From there, he reaches between the opponent’s legs and with his elbow deep on the thigh; his foot comes in, he lifts the opponent, turns him with his hands and takes him down to the mats.

With the broad overview presented, let’s see some of the finer details that Travis presents – and which will make this throw a successful one for you.

For starters, the grip you have over the opponent’s shoulder. Your hand needs to be here, as it’ll enable you to – as you step in – pull the opponent down with it and then throw them over that corner as well.
As opposed to the way this grip is traditionally placed, at the opponent’s tricep muscle, Travis explains that he feels that the over-the-shoulder alternative gives him an ability to disguise his intentions a little bit better. Additionally, when the opponent goes to break your sleeve grip on the opposite side, you’ll have the perfect opportunity to step in and throw; using their grip-breaking skills against them.

Pay attention to how Travis – when he steps in – doesn’t grip the leg with his second arm in a shallow manner, with his wrist. Instead, he does it by reaching deep, with his elbow to the thigh. That way, you’ll pick up the opponent’s middle leg, where its’ the meatiest, instead of doing it at its center.
Also, as you reach for the opponent’s leg, go chest to their body; leave no space between yourself and them.

From there, bring your back leg in and pick them up into the air; using your hands almost as a steering wheel (hence the name Te Guruma – „hand wheel“) to bring the opponent down to the mats.

To end his demonstration, Travis goes on to say that he understands that there are a lot of different areas that the Te Guruma can be done from; as well as that there’s a ton of different variations to it out there.
For example, one of the ways he used to do it was from the collar grip. However, that’s a more advanced way of executing the throw, as your opponent will be able to post with the arm on the same side as your grip. That is, when you go for the throw itself, they would be able to post on the floor. So, in this case, it’d require more of a lift and commitment to the throw on your behalf.

Watch Travis explain and demonstrate on the video below: