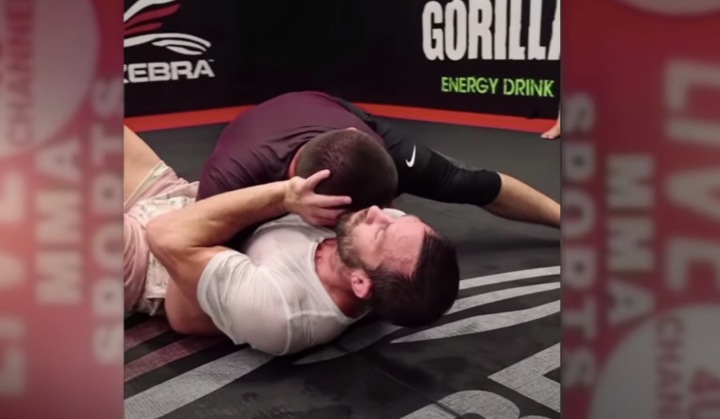 The recently inducted UFC Hall of Famer Khabib Nurmagomedov has one of the best, if not the best, top game in MMA.

Famous for his application of world-class grappling in MMA, Khabib’s game revolves around taking his opponents to the ground and attacking them using constant pressure and heavy top control. He likes to bring his opponents to “the deepest ocean” because he can use gravity to tire them out and eventually finish with either strikes or submission.

To grapple like Khabib, it is important that you develop a strong pressure passing game and heavy top control. This article will teach you how to smash the guard like Khabib.

How To “Smesh” the Guard

Khabib is a black belt in Judo, and an International Master of Sport in Sambo, Pankration, and Army Hand-to-Hand Combat. Aside from being a UFC champion and one of the best lightweights ever, he is also a two-time combat Sambo world champion and 2012 NAGA welterweight champion. Here’s a glimpse of how Khabib likes to break someone’s guard.

Khabib uses all parts of his body in grappling situations. He likes to lead using his hips and legs to maintain pressure. This makes weight distribution and top control easier to apply. In fact, many of Khabib’s opponents are surprised at how good he is at maintaining dominant positions. Khabib teaches that after taking the opponent down and forcing them to half guard, use your legs, arms, and head to limit the opponent’s defensive options.

When in the mount, Khabib doesn’t just use his arms to hold the opponent down. He prefers to use his legs to trap the upper body and hold the opponent. If the opponent tries to escape the mount by pushing one leg down with both hands to create space and force the half guard, it leaves their face vulnerable to punches. Therefore Khabib is always busy with strikes so that he can move to better positions. One punch makes a big difference in a fight, and landing a good one can finish the fight instantly.

Putting the opponent in the bottom mount position requires excellent control using your legs and hips. Sometimes when the opponent protects their face using their hands, Khabib comes on top to make the opponent react by making them think they are now open to some form of escape. As the opponent lowers their guard, he goes for either wrist control or back to the ground and pound if he cannot secure the wrist.

Another trick Khabib uses to maintain the pressure is by dropping his weight on the opponent, using his arm to grab the neck and the other as a base to balance on the mat. If he wants to flatten the opponent, he switches from grabbing the neck to the rear shoulder while the other hand posting on the mat moves to the elbow, forcing the hand up. He can then move to the high mount or apply a grapevine.

Making use of the legs and hips allows Khabib to use his arms freely. He suggests doing a drill after every training session for 5-10 minutes where you trap your training partner’s upper body in full mount, only using your legs and letting them escape.

Again, don’t use your arms as much as possible in this drill. The idea is to work your leg muscles, helping you build your leg squeeze, endurance, and balance so that you can keep the mount position for as long as you need to.

Typically, most grapplers focus too much on their arms when securing pins. While it may be effective to some extent, it will not work on higher-level opponents.

This is one of the reasons why Khabib uses the leg lace (triangles the opponent’s legs). Instead of locking your arms to control the hip and legs, Khabib uses his legs by putting them on top of the opponent’s and trapping them using a leg triangle configuration.

If the opponent decides to hug the upper body, Khabib will proceed to strike using elbows and punches the face. He goes for submissions like the armbar and triangle in cases where they defend. He finished 5 out of his 29 matches using the triangle, which includes his last win in the UFC against Justin Gaethje.

Here is a video of Khabib competing in the 2012 North American Grappling Association experts division before his rise in the UFC.

It is commendable that Khabib spent his lifetime mastering his own craft. His dedication and work ethic in martial arts gave him the confidence to take challenges head-on, making him one of the most respected mixed martial artists of all time.

His approach to grappling is to maximize your ability to inflict damage from all positions. Regardless of the situation, you should be able to leverage all your tools so that you can stay steps ahead of your opponent’s defenses. We encourage you to try his approach to grappling. You’ll surely turn a lot of heads in the gym.