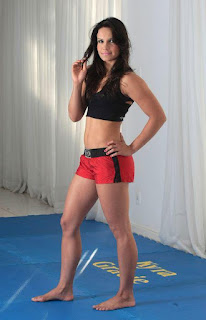 This would be a grappling dream match:

“Ronda Rousey has been impressing the world with her MMA career. The six-win streak via armbar submissions have impressed even the five-time world champion of Jiu-Jitsu Kyra Gracie.

“She has great skills pulling off that armbar. Congratulations”, compliments the Brazilian. “I guess she’s doing a great job representing women in MMA. She has a good Judo background and managed to well adapt her skills to MMA. Each fight she comes better and better on ground and stand-up skills”.

Kyra points out Rousey’s trainings with Cesar Gracie as one of the factors for her improvement at grappling. “She’s training Jiu-Jitsu with my cousin Cesar in San Francisco, and I can see she’s evolving”.

A three-time ADCC champion and five-time world champion, Kyra is training Boxing in regular basis eyeing her MMA debut. And she keeps getting more excited about the transition.

“I’m training right now. I added Boxing to my training routine, I’m training with Claudio Coelho but I always focus more in Jiu-Jitsu because that’s where I come from. MMA growth makes me think about it more and more each day. I’m studying some propositions and checking with my coaches when would be the best moment to do it. But it doesn’t slow things down”, says.

Women’s MMA market is still pretty small in Brazil, and being a Gracie might help her to sign a contract with a big organization like Strikeforce. Despite that, Kyra is not in a hurry.

“I gotta take one step at a time. I can’t do it all at once and then break down. I’m a white belt at this sport”, acknowledges.

However, Kyra trust her ground game skills on a possible future fight against Ronda.

“I have pretty good armbar defense (laughs). I proved that already in Jiu-Jitsu tournaments”, remembers the fighter, warning she would have a bigger advantage over Rousey in case they had a Submission or a Jiu-Jitsu fight.

The possible fight against Ronda is far from being a reality, but another Brazilian might cross Rousey’s path in 2013: Cris Cyborg. Strikeforce champion on a heavier division, Cris owns a sharp striking game and it could put Ronda in trouble.

“They’re not on the same weight class, but I wanna watch it in case it happens. It’s hard to predict an outcome for this fight because each fight is unique”, says the black belt.

“I guess Cris is more complete because she has a great stand-up and has been evolving a lot on the ground, and she’s a two-time world champion (of Jiu-Jitsu) on the purple belt. Ronda is an Olympian athlete, who trains since she was a little girl and is used to suffering from training”.

Cyborg’s roots are in Muay Thai, but she’s been constantly investing on grappling. And a proof of that is her Jiu-Jitsu evolution, earning the world title twice in the modality.

“I trained Jiu-Jitsu with Cris in San Diego earlier this year, before World. It would be a great experience and we both benefit from it”, said on the possibility of training with Cris Cryborg for her MMA debut.

“Since I trained with her before World I could notice her moves and explosion. I knew it would be hard to take that world title from her”.