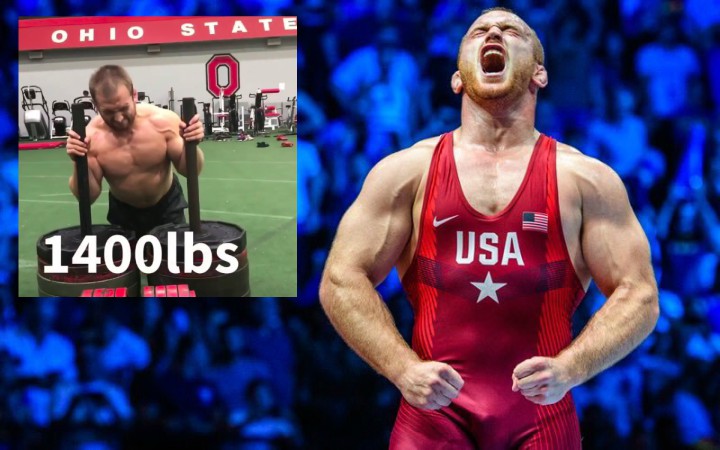 Two returning freestyle wrestling Olympic champions were set to battle at the 2017 world championships. This had huge implications in the team race for the World Championships too since Russia and the United States were both international powerhouses in wrestling.

Representing the Russian Federation was Abdulrashid Sadulaev, also nicknamed “The Russian Tank.” A legend in the making, Sadulaev was the clear champion in the 86kg weight class at the 2016 Olympics in which he won the gold medal without giving up a single takedown to any of his opponents. Leading up to the Olympics, it was difficult to scout Sadulaev for weaknesses. His defense was so solid that he had barely given up any points in his international career.

Representing the United States of America was 20-year-old Kyle Snyder, who would finish the day as the youngest wrestler in American history to win an Olympic gold medal. Competing in the 97kg weight class, Kyle Snyder won his matches in all sorts of ways. There were dominant matches and there were comeback wins. In his finals match, he narrowly beat his seasoned opponent 2-1.

After the Olympic games, Sadulaev announced that he would move up to compete at the 97kg weight class. Spectators wondered if he could gain that much size and still compete, but he left no doubt of his excellence after winning the Russian national tournament.

When asked about his future competitor, Kyle Snyder’s response spoke volumes about his mindset.

“He’s a great competitor, and I look forward to competing against him. I think it’ll be a good match.”

Sure enough, the two were set on a collision course in the finals of the 97kg weight class at the 2017 world championships. I’m not spoiling the ending for you, so enjoy watching this match here.

The post-match interview spoke volumes of his mindset, too.

“I’m hyped, man. I can’t wait for this. This was the match I was least nervous for. I mean, I was so excited, so thankful for this challenge and opportunity. Great opponent, hopefully we can continue to compete against each other because that match was fun for everybody…. I’m most proud of my effort. Most proud of my emotional control.”

The difference is subtle but has significant implications. Great competitors understand that each obstacle presents itself as an opportunity for the competitor to improve. The more obstacles they overcome, the better off they’ll be and the faster they will progress.

This shift in mindset is reflected in a great competitor’s speech and habits. In a way, great competitors become mentally conditioned to understand that obstacles lead to a higher performance.

For example, great fighters don’t hide from other great fighters. Instead, they look forward to that challenge as a massive obstacle. It also becomes apparent that they love a good battle.

On the big day, good competitors hope that every condition will work in their favor in order to perform at their best. The best competitors? They understand that not everything will happen in their favor and still find a way to win.

In training, some people don’t particularly want to get tired. They dislike the process but want the end result. On the other hand, some people show up to practice with the intention of getting as tired as possible with the understanding that the harder they push themselves, the quicker they progress towards their goals. While the ultimate goal may be the same in both circumstances, the one who wants those obstacles and actively seeks adversity will thrive when the situation requires them to overcome and rise to the occasion.

Cultivating this mindset is simple in execution but harder in practice. While it’s important to have an end goal, it’s important to pull your focus to loving the process. “I want to achieve [X]” leads to becoming stressed when true obstacles arise. On the other hand “I need to seek out the obstacles between me and [X]” leads to achievable micro-goals in order to reach the results.

You will undoubtedly run into obstacles while trying to achieve the extraordinary. Why not enjoy them? Why not enjoy the satisfaction that comes with overcoming a difficult obstacle? If you can learn how to do this, you will grow so much faster.

What obstacle will you actively seek out today to be the best version of yourself tomorrow?