Key Details For Setting Up A Perfect Ippon Seoi Nage 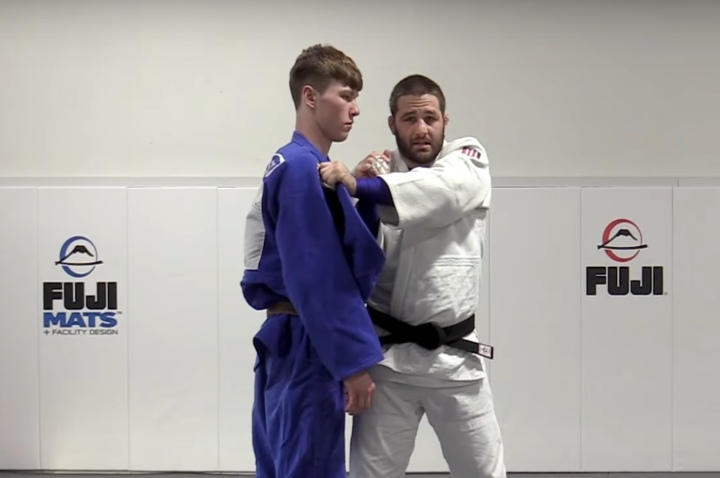 The Ippon Seoi Nage is a powerful Judo throw, and it’s often one of the earliest throws that are taught to students. However, just because it’s taught early doesn’t mean that all of the details to it are shown… In fact, there’s so much to the Ippon Seoi Nage that can make it work for you way better than it has up until now!

Several key points for a successful setup of this throw are shown by Travis Stevens; a Judo Olympic Silver Medalist and a black belt in BJJ under John Danaher.

Travis starts out by emphasizing the importance of blocking your opponent’s shoulder when you’ve established the collar grip for the Ippon Seoi Nage. He demonstrates how, when he places his hand onto his student’s chest, the student can easily rotate into that arm; regardless if Travis is trying to block him from doing so or not. However, when he places his hand onto the student’s shoulder and uses that position to block him, that’s when he is successful.
Therefore, Travis points out, don’t just leave your hand on your opponent’s chest when you grab their collar! Instead, your hand needs to be high so that you are pressing into their shoulder with it.

Another important point is that your leg, which is opposite to the arm you’re gripping the collar with, needs to be in front at all times. Also, make sure that you are close to your opponent; if you’re too far out, you won’t have that pressing power applied into their shoulder.

Placing your collar hand and engaging it properly will save you from a lot of unnecessary trouble. For example, Travis demonstrates that your opponent won’t be able to reach your collar at a neck level. They might be able to grab your Gi at the shoulder, but that’s as high as they’ll be able to go. Plus, you’ll have a much easier time of breaking that grip than the case would be with the other ones.
Travis explains that this will also enable you to walk in close to your opponent, allowing for a quick Ippon Seoi Nage entry.

But, what should you do with your other arm? Travis says that it can stay up for a bit, but it’s important to get it to the inside position – leading with your elbow – against the opponent. This’ll make it more difficult for them to grip your sleeve.

COUNTERING A POSSIBLE THREAT TO YOUR IPPON SEOI NAGE SETUP

As mentioned previously, the collar grip – when pressed into the opponent’s shoulder – will make it more difficult for them to get a favorable grip themselves. You could use this to further your advantage, Travis shows; let them to go underneath your arm. Clamp down on their arm, but allow them to establish a low collar grip. This way, you’re incapacitating them from trying to get a 2-on-1 grip on your „free“ arm; you’ve made it possible to have a 1-on-1 handfight and increased your odds of success!

However, what if your opponent pulls their elbow through because they want to climb up over your shoulder and grip the Gi on your back?
There’s a counter. When he feels that his student is pulling the elbow through, Travis simply rotates his collar grip wrist (hand is pressing onto the shoulder, remember) into the student and shuffles to the side; using the forearm to further shield himself.

Travis Stevens explains and demonstrates these key Ippon Seoi Nage setup details on the video below: