Keenan Cornelius Has a Stealth-Like Triangle Setup From The Back 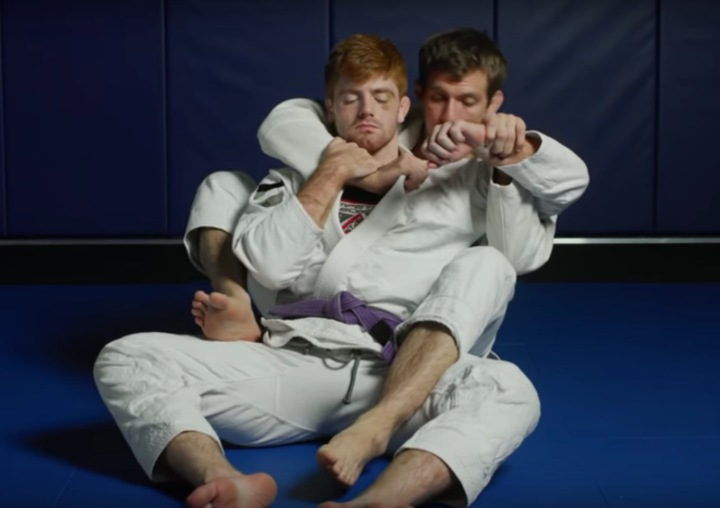 Tell us, honestly: how many times have you taken someone’s back, only to struggle to finish with a choke for the remainder of the round? Yup, all too often.
Well, Keenan Cornelius has a sneaky solution! He explains how to setup a Triangle Choke – no, not the Reverse Triangle, but the regular one – when you have someone’s back.

BLOCK THEIR HAND AND THREATEN THEM WITH A CHOKE

Starting with having a seat belt grip on his training partner, Keenan starts by removing one of his hands in order to reach towards his partner’s collar; threatening him with a choke. His partner, in turn, defends this by grabbing Keenan’s choking arm, trying to keep it away from his neck.
What’s important here is that Keenan’s training partner is defending with the hand which is on the same side that Keenan’s choking hand is. This is because, as Keenan demonstrates, he had previously blocked his partner’s other hand by gripping it and keeping it down.

FALL TO THE SIDE AND SWING „UNDERNEATH“

Keenan proceeds to lift the training partner’s arm – the same one which he is blocking – in order to elevate his elbow. He then places his opposite-side leg to the partner’s hip, all the while he falls to the side of the arm he has blocked and lifted. Once fallen down, he swings his „blocking arm“ (which remains below his partner’s arm) underneath his own thigh.
Upon doing so, Keenan uses his choking hand to grab the partner’s defensive hand at its wrist and then passes it to his other, below-the-thigh hand.

He also shows that, if the situation permits, you can do this from the seated position as well; first by reaching underneath your own leg with your arm – while threatening the choke with another – and then by grabbing your opponent’s hand to block it.
However, it might be difficult to do this from the seated position. So, if this attempt fails and your opponent’s wrist is too far for you to reach it, Keenan advises that you fall to the side and then grab it. This will make your job a lot easier. Also, he emphasizes yet again that you can use your choking arm to grab their hand, and then pass it to your other arm.

From there, Keenan shows that you don’t even have to go for the Triangle to finish your opponent – you can go for a choke yet again! However, if they defend this by grabbing your arm with their opposite hand (remember, their other hand is blocked by your other arm), Keenan demonstrates that you can grip it again!
Then, Keenan lifts his foot off his training partner’s hip, forcing his partner to turn into him. Once there, he says that all he needs to do is relax and let his partner get to his knees – which places him right into Keenan’s opportunity to lock the Triangle and get the tap.

However, if the partner decides to not turn into him, Keenan places his foot back onto his hip and uses it to help pull him to the side; at the same time escaping with his hips in order to get a favorable angle. Then, he pulls his partner’s arms in towards himself, throwing his front leg over his shoulder and then locking a Reverse Triangle.
Then, he follows all the usual steps: he pulls his training partner’s arm across, pulls his head down, pinches his knees together and squeezes with his leg in order to get the submission.

Watch the video below to see Keenan explaining this setup in detail!