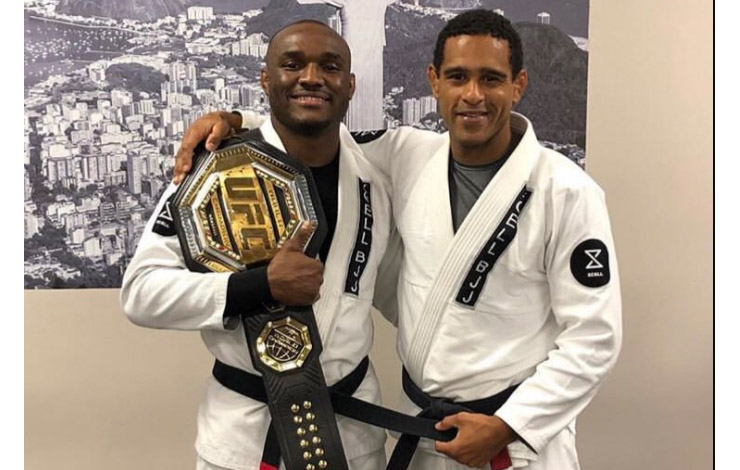 Kamaru Usman is a Nigerian-American mixed martial artist who competes in the Ultimate Fighting Championship, where he is the current UFC Welterweight Champion.

Usman recently shared with JRE how a loss inspired him to accent gi training. Here’s what he had to say:

“I’d never had a gi before, but I started training with Jorge Santiago my jiu jitsu coach every f*cking morning. He just gave me my black belt after my last fight.” Kamaru Usman

“I get in the fight, I throw a one/two, then his legs are right there so I hit him with a double. Within 15 seconds I’m in full mount, not really knowing what I’m doing but I’m trying to throw punches. I think (Jose) Caceres is like 6ft 2 or something like that – he’s got long limbs. He throws his legs around my body, and I’d never seen any s*it like that before (laughs).

“I started to panic and thought I needed to get out, so I did the wrong thing and turned my body to get up and walk away. He followed me and just climbed up on my back; we’re not even sweaty yet. I hold him off for about a minute and a half trying to fight off this choke; I knew I couldn’t let him down to the floor because I didn’t really know a defence on the ground. He knew what he was doing and me standing up like that started to make my feet shaky. I started to get full of adrenaline when I realised, I was about to lose.

“We had a commission meeting before the fight and I was told if I got choked unconscious I wouldn’t be able to fight for six months. I’m a tough guy, so in my mind I wasn’t going to tap – he needed to put me to sleep. But, it took me eight months to get that fight, and I was broke as s*it, so I started thinking there’s no way I couldn’t fight for another six months. I f*cking tapped. I walked out of that fight and just paced in the back for like two hours.”

“Ever since the loss, I got a f*cking gi,” Usman continued. “I’d never had a gi before, but I started training with Jorge Santiago my jiu jitsu coach every f*cking morning. He just gave me my black belt after my last fight.

“I never worried about that (black belt). Yes, I was beating up blue belts before I was even a white belt because I knew how to grapple through certain things, but I never had those jiu jitsu skills. Santiago kept challenging me and pushing me, so when I got my purple belt I felt like he was alerting other people of what to expect when we were rolling.”