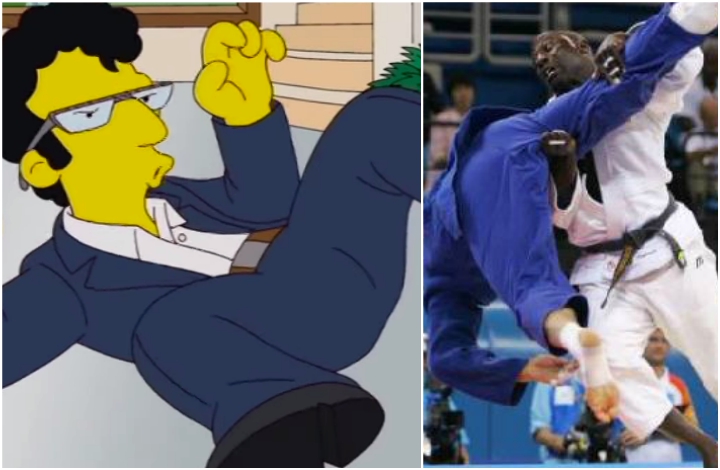 Ferguson is a four time national champion in judo. At the age of 29, Ferguson competed in judo at the 2004 Summer Olympics in Athens, Greece in the men’s heavyweight division. He was previously an alternate in the 2000 Summer Olympics in Sydney, Australia.

He has competed in the best submission wrestling tournament in the world: ADCC where he was able to showcase his explosive double leg takedowns. Unlike many of the judoka in this ranking, Ferguson is ranked in BJJ. His BJJ instructor is BJJ legend Ricardo Liborio. Ferguson as a 3rd degree BJJ black belt is possibly the highest ranked elite level (Olympian) Judoka in BJJ.

Rhadi Ferguson has just announced the immediate availability of the Newaza Excellence Video Series, enabling practitioners and coaches in the sports of Judo and Brazilian Jiujitsu to immediately access training information which will enhance teaching, instruction and learning. Newaza, actually written as ne waza, is Japanese and it means ground fighting techniques.

He recently gave his opinion on what we call ‘Guard puling’ in BJJ. Transitioning directly from standing to the guard position is known as pulling guard. Tsunetane Oda, a judo groundwork specialist who died in 1955, demonstrated the technique on video.

“I don’t have an issue with pulling guard. What I have an issue with is the acquisition of an advantage which you did not work to achieve. In sport, if you want an advantage, you have to work toward and for the advantage. Sitting down and imposing your advantage without working for it is outside of the spirit of play and it it precludes the ability for takedowns to occur and for those who coach competitors to see the importance of teaching them. At the end of the day, BJJ is no more than Kosen Judo. If you choose to do the study and look at it and see it for what it is, that is what it is.

Now just like American football, basketball, track and field and every other sport, there have been innovations over time. But the things like the De La Riva guard, half guard, buttlerfly guard, etc.,. were all taught back in the early 1900s and there is video evidence of such things. Being great in one area of focus is good. There’s no denying that, but forsaking the other areas because they are difficult to learn or because you are not good at them is different thing all together.

BJJ has an identity crises and Judo does as well. BJJ is damn near like judo. Two small rule changes damn near turn it into judo. One, the implementation of hard core accumulative stalling penalties and two, the removal of guard pulling with the requirement to do an actual throw or a skillful entry into newaza.

If the takedown is not a valid, true attempt, you stand back up and are penalized for a “false” attack. This will encourage more “failed” double and single leg attempts but I’d rather this than what we see now. And what’s so bad about BJJ practitioners learning the how to to Yoko and Ma Sutemi Waza?

And when it comes to stalling, if you stall on the ground, you start back on your feet or something that creates an aversive stimulus to stall. Because, why should you be allowed to stall? This will make the action occur at a blistering pace. I don’t know why the IBJJF is fighting it. Old school BJJ is Old school judo.

Just turn it into what it is and what it should be and allow your practitioners to dominate the BJJ and Judo landscapes. And there is entirely NO REASON that a match need be 10 minutes. Implement the stalling penalties and 5 minutes is more than enough time to empty your physiological vat.”