Jon Jones Out Of UFC 200 – Flagged For Doping 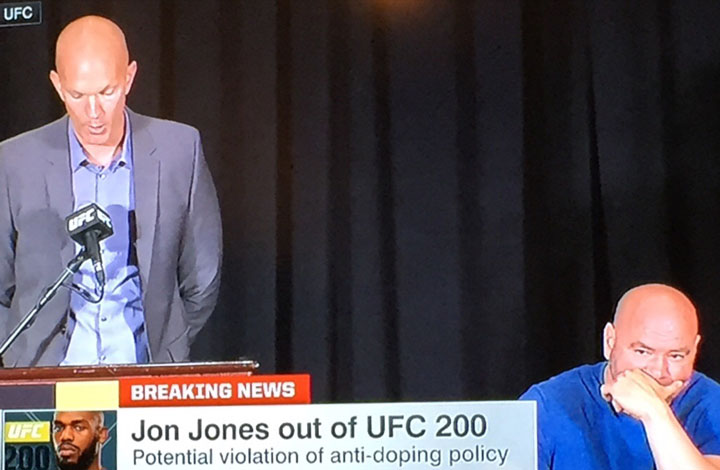 UFC’s ultimate bad boy has hit the self-destruct button once again. UFC has been notified tonight that US Anti Doping Agency (further referred to as USADA) flagged an out of competition sample collected June 16th.

Jonses fight has been removed from the fight card, Brock Lesnar vs Mark Hunt becomes the main event. USADA will prvide a full fair legal review process before imposing sanctions.

Daniel Cormier was crushed upon hearing the news.

Happened to see DC outside the presser. He could hardly speak. Distraught would be putting it mildly.

Slightly later he offered a statement:

“I’m very disappointed. I worked really hard to prepare for this. (sigh) You take care what you can take care of and that’s what I did. More than anything, I’m really disappointed”

A number of athletes is trying to throw their hat in the ring while Cormier says he’s willing to go up in weight to 220 lb or 225.

Conor McGregor’s coach took his time to stress out just how much bigger this infarction is compared to Conor’s retirement snafu over media obligations. One thing’s for certain UFC is in a very tight spot, they’re already offering refunds for the paper view.

I wonder if there’s any regret taking him off the card over a press conference now? ?????

Jon Jones has been training jiu-jitsu since early 2013 at Gracie Barra New Mexico under professor Roberto Tussa Alencar. It’s current;y unclear what his level is however he is a black belt in gaidojutsu-  Greg Jackson’s system including all aspects of MMA: striking, wrestling, submissions and self defense.

Jones has been convicted of a DUI back in 2012 and more recently, in 2015 he tested positive for a primary metabolite of cocaine. Jones was then involved in a hit and run in Albuquerque, New Mexico. He later plead guilty and got sentenced to 18 months probation.

His last fight was in April, 2016 against Ovince Saint Preux which Jones won by decision.