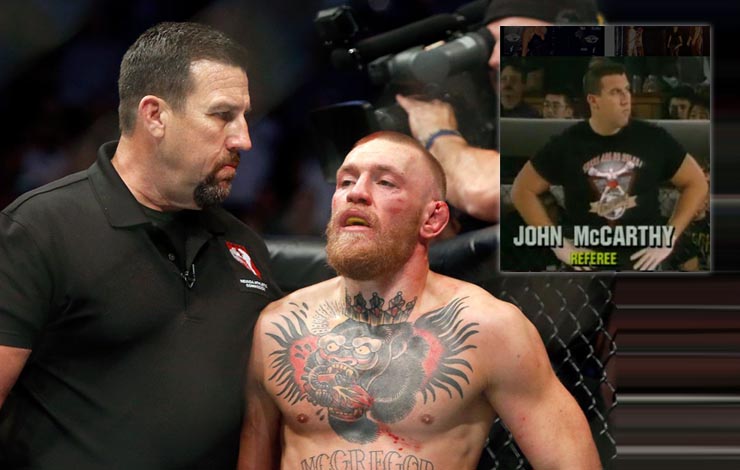 Big John McCarthy is one of the most recognizable faces in the UFC. The legendary MMA referee and bjj black belt found himself in a big scare in July while teaching bjj.

What happened is this – he was explaining a proper d’arce choke and got down on the ground as his student was setting one on him. The sub took about 90 seconds before Big John tapped to it. Afterwards he got up and went about his day.

However next morning things took a wild turn for the worse – he had a burning sensation down the neck and shoulders into arms. This coupled with no feeling in his thumbs gave him a scare.

“I hurt my neck really bad,” McCarthy told Ariel Helwani on Monday’s edition of The MMA Hour. “I actually got paralyzed on one side of my body.”

According to the exams he had destroyed his C5, C6 and C7 vertebra. Discs were broken apart and pinching down, crushing nerves. McCarthy opted for a surgery in August but the pain and burning wouldn’t go away.

“The [nerves] that were leading into my arms just were crushed,” McCarthy said. “My thumbs were completely numb, my fingers were numb. I had that burn coming down from my shoulders.

“It just was a serious problem.”

In September he had his vertebra fused with spacers put in to protect the nerves.

“I’m not the same person,” McCarthy said. “I used to be able to do things, I could grab someone and pick them up. Those days are gone for me. … It taught me a lesson and it made me realize how fast I can absolutely lose what I love doing.”

He admits he can no longer roll a lot and has to limit himself in other ways. This also lead him to consider retiring from refereeing –

No definitive word on if he’s permanently retired as a ref yet. However he will be in a broadcast booth. Reportedly McCarthy said:

“Somebody is telling me something,” McCarthy said. “That’s really why this whole move came about.”