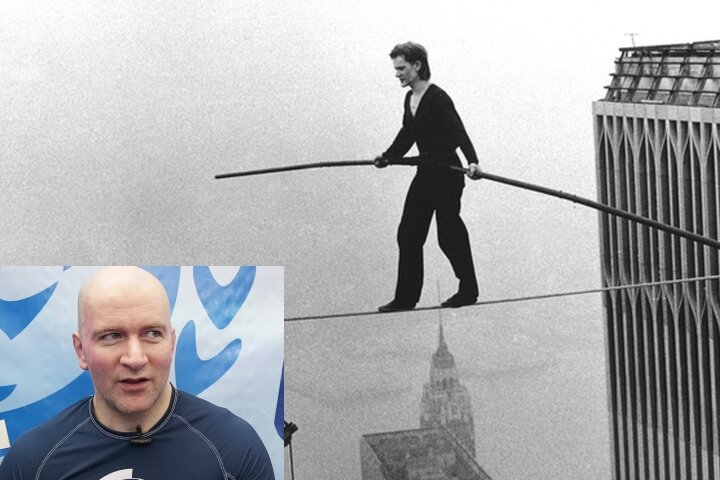 Do you tend to get nervous, even scared a bit, before competition? You’ve put in the effort prior to it – you trained as much as you could and you became much better than you used to be… But no matter what, when you step to face your opponent, your stomach twists and turns like crazy.
John Danaher understands this issue well. So, what he tries to instill in his students is a sense of “everydayness” – that there’s no difference between what they do in training and in competition; often using a “parable of the plank” to better describe this idea.

To Professor Danaher, training and competing are practically the same thing:

Many people, I think, when they think of competition – they tend to think of it as an extraordinary event. Like: “Okay, I’ve got my training here, which is ordinary, everyday. And then there’s the stage, which is extraordinary, which stands outside from what I normally do.”
My whole emphasis is that there’s no difference. And so, as the competition comes closer, I remind them [his students] more and more that what they do on the stage is exactly what they do here, in the [Blue] Basement every single day.

He shares a story of when he was a child to better illustrate his point:

When I was a child, growing up in New Zealand, we grew up in a very rural area. One day, when we were all around 5-7 years old, our teachers came to us at this small school. And they said: “A visitor has come and you’re going to watch him. He’s a daredevil.”
And he came in and he performed stunts for us… For his final trick, he went to the two buildings of our school. Now, those buildings were around 2 stories tall, but to us [the children], they were like New York skyscrapers.

He put a plank between the two buildings and he walked across the plank – once, twice, three times. And we couldn’t believe it. To us, it was like he walked between Twin Towers. We couldn’t believe it, it was incredible.
But in the end, he came down with his plank and he put the plank on the ground. And he asked us all to walk across it. Which we did – it was easy.

That’s the point when the stuntman shared an important lesson with the children:

And then he looked at us and told us something I never forgot. He said: “The plank is the same. I put it higher, so it took your breath away… But you guys just ran across the plank. The plank didn’t change. Your perceptions of it did.”

And he’s right. That’s the difference between the gym and the stage.
There is no difference – the plank doesn’t change. Only your perceptions change. That’s the emphasis I put on my athletes.