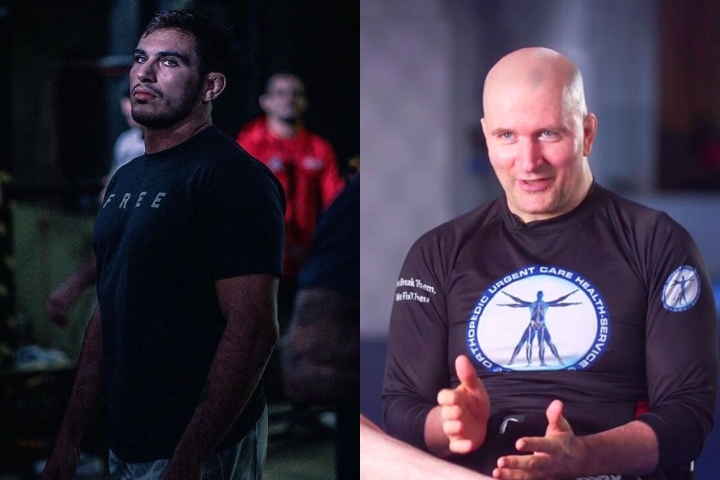 Not matter how dissatisfied with your Brazilian Jiu-Jitsu journey you may be so far, there’s always going to be room for progress. For becoming better… And even for completely reinventing yourself.
For instance, that’s exactly what Giancarlo Bodoni did ahead of ADCC 2022. John Danaher explains how Bodoni had a difficult time getting used to the no-gi game:

I first met him around two years ago, while filming instructional videos in Massachusetts where he worked at Bernardo Faria’s school as an instructor.
He was a solid positional player in the gi and was looking to switch into no gi. The transition proved difficult as he was repeatedly leg locked in local competitions.

When our team broke up in Puerto Rico, he saw it as an opportunity to come and train full time in Austin. He uprooted his life and made the move.

Bodoni was supremely committed to training. And it paid off:

This commitment deeply impressed everyone, but even more impressive was his work ethic upon arrival. Every day he was in the gym working on every aspect of the game.
As weeks became months his training intensity continued to rise. He started doing very well in local competitions. His submission finishes, a weak point of his prior game, started to massively improve. His leg lock game, his nemesis in the past, started to become a strong point.

When he stepped on the mat at ADCC it would be a very different Giancarlo. In his four matches he finished three out of four of his opponents including the champion from the previous ADCC and was just seconds away from finishing the fourth when time expired. He did not have a single point scored on him.
When he faced the athlete most people considered the foremost leg locker in the division, Giancarlo easily leg locked him. In exactly one year of work, Giancarlo completely reinvented himself.

In the final he took on the formidable Lucas “Hulk” Barbosa, a man who had defeated Giancarlo many times in the past. Beating someone who has repeatedly beaten you before is not easy – Giancarlo turned it all around and dominated the match and then submitted him.

Professor Danaher explains that there’s a powerful lesson in this story for everyone:

You are never a finished story. You are a never a final product. Improvement and progress is always possible. Obstacles that once seemed insurmountable can be overcome.