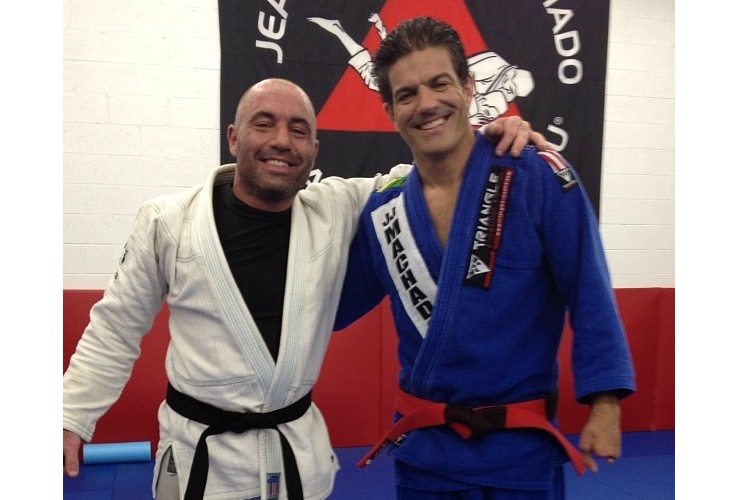 In this video interview with fellow BJJ black belt and A.I. specialist Lex Fridman, Joe Rogan talks about what his Jiu-Jitsu game is like:

“I don’t have good takedowns. My guard is good. I’m very flexible, I have a good rubber guard. I look for the double underhook half guard to attack with the lockdown and squeeze my way up.”

Fridman who has rolled with Rogan said:

“You have a real control based game. You remind me of a Xande (Ribeiro) type of Jiu-Jitsu player, who controls opponents really well.”

Fridman went on to ask Rogan (53 years old) if he ever considered competing in jiu jitsu:

“I get obsessed with things and i have to recognize what that is and these competitive things like competition especially like really exciting competitive things like video games they’re very dangerous for me. The ultimate competitive video game is like jiu jitsu and if i was young i most certainly would have done it if i didn’t have like a very clear career path it was something that i enjoyed. My concern would be that i would become a professional jiu jitsu fighter when i was young and then i would not have the energy to do stand up comedy and do all the other things that i wound up doing as a career.”

“When i was 21, I quit my job teaching i was teaching at boston university. I was teaching taekwondo there and I also had my own school in Revere I knew I couldn’t do it right and also be doing stand-up comedy. I knew i couldn’t do both of those things. There was no way you have to be cognizant of that obsessive force within you to make sure. Yes I have to know how to manage my mental illness right. That’s a very particular mental illness and i think that mental illness again, in my formative years from 15 until i was 21-ish 22, those years were spent constantly obsessed with martial arts that was my whole day. I mean i trained almost every day. The only time i would not train is if i was either injured or if i was exhausted. If i needed a day off. But i was obsessed and so that part of my personality that i haven’t nurtured is always going to be there under the surface and when you it gets reignited by something it’s very weird it’s a weird feeling and it can get reignited with a video game. It can get reignited with anything that obsessive that you know whatever it is that competitive demon…”