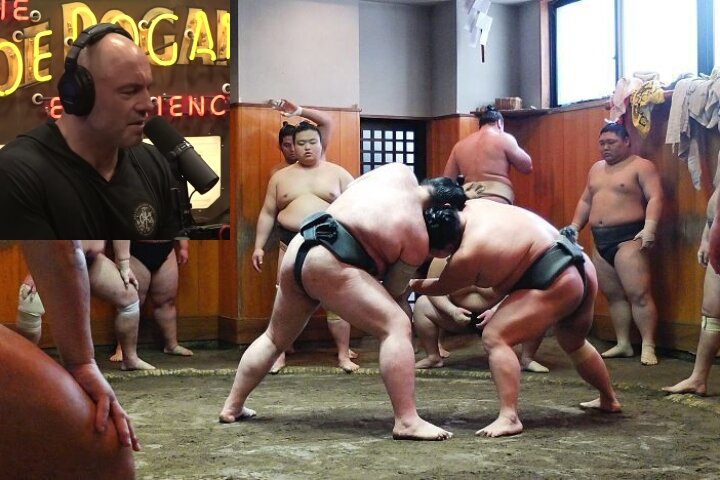 Sumo is a Japanese style of wrestling and a Japanese national sport. It originated as a performance in ancient times, whose purpose was to entertain the so-called “Shinto deities“.
Today (and as it’s in line with the tradition), only men practice this sport professionally in Japan, where it’s quite popular.

However, not much is known nor understood about Sumo in the rest of the world. And that stands true even for experienced martial artists, such as Joe Rogan.
Joe spoke about how Sumo looks weird to him in a recent Joe Rogan Experience podcast episode:

You’ve got to be big [for Sumo]. They eat so much – if you’ve ever watched how much Sumo wrestlers eat, oh my God. You just have to have mass.
In Japan, it’s a gigantic tradition. I mean, just the rich history of it… It’s a big deal over there.

Also, you’re wearing like this rope-diaper. And you hang onto someone’s underwear and throw them around by it. It’s a very strange sport.

Him and his guests watched several videos of Sumo matches, questioning who the sport’s “best athlete” is today.
With no real knowledge of the sport, they didn’t know that arguably the best Sumo wrestler ever is Hakuho Sho; an athlete who won 45 grand championships over the course of his 20-year career.

Sho has recently retired and is an active coach.

Despite Joe’s and his guests’ confusion at the end of the clip, the rules of Judo are pretty simple: the athlete who first exits the ring or touches the ground with any part of his body (other than the soles of his feet) – loses.
There are no weight restrictions or classes, which means that the athletes can easily find themselves in a fight against someone who is much larger than them. So, weight gain truly is an essential part of becoming a successful Sumo wrestler.