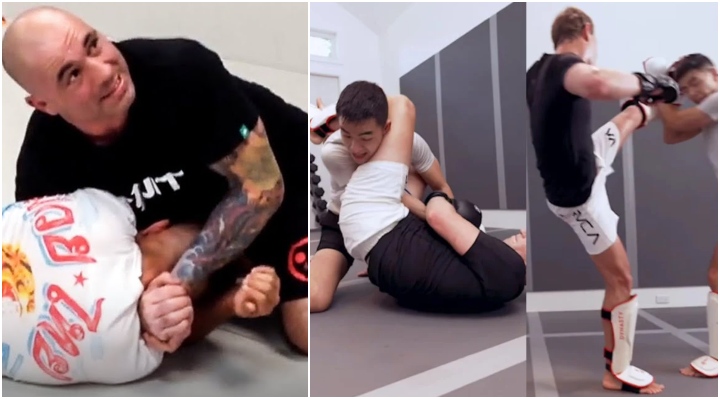 In one of the most interesting parts of the interviews, he told Rogan how his life changed after he started training MMA and Brazilian Jiu-Jitsu.

The point of offering all these perks at the Facebook (Meta) HQ are to make working long hours and practically living at work bearable. Many employees sometimes work 16 hours days for months..

The BJJ training is taught by various BJJ black belts.

” He’s, he’s great. Yeah, super nice guy. And I feel like I’m learning a ton and that The crazy thing is like I’ve I don’t know, I mean, it’s, it really is the best sport. I don’t the question isn’t how did I get into it? It’s how did I not know about it until just now from from from like, from the from the very first session that I did like five minutes in I was like, Where has this been my whole life. I like it’s like, Alright, my mom made me do three varsity sports and like my life took a wrong turn when I chose to do fencing competitively instead of wrestling in high school or something, right?”

You can see the pair sparring and trading kicks in a studio while outfitted in fight training pads.

You can then see Zuck grappling on the floor, with Wu exclaiming ‘nice!’ when Zuckerberg rolls over Wu and gets on top of him.

Many BJJ and MMA stars rected and evaluated Zuck’s performance.

This is great!’ ‘I’m so happy to see this. Training looks solid too!’

“It’s like, like, it’s like, there’s something that’s just so primal about it, that’s, I don’t, I don’t know, it’s, and I’ve since then I’ve just introduced a bunch of my friends to it. And that’s been really fun. Because now it’s like, we train together and we just like, wrestled together and just, I don’t know, there’s like, a certain intensity to it that I that I like it.”

“It’s, it’s sort of, I don’t know, maybe it’s like there’s this cultural thing where, where maybe a lot of people haven’t considered it, right, but I’ve had 100% hit rate of introducing friends to it and converting them to people who now train every single person who I’ve like, who I have, who I’ve kind of shown it to is like, this is amazing. This is like obviously how I should be training and working out.”

Zuckerberg explained how Jiu-Jitsu helps him with dealing with stress:

“And then it’s like, okay, well, f**k, now I need to like, go reset myself and be able to kind of be productive and not be stressed about this, how do I do that? So I basically I go, I like, I read, I taken all the information. And, and then I go do something physical for an hour or two, and just kind of reset myself. And over time, what I’ve found is that it’s not actually just, I used to run a lot. But the problem with running is you can think a lot while you’re running.”

”And this is sort of how I got into MMA too, is after now, I don’t spend as much time in Hawaii because things are ramping back up and I’m in the office a lot more. So it’s like, Alright, there’s, there’s not as much boiling in Palo Alto. So it’s like, alright, what’s the thing that is both like, just super engaging physically, but also intellectually, and where you can’t afford to focus on something else?

“And I think to some degree, it’s like MMA is like the perfect thing. Because it’s like, if you don’t, like you, you stop paying attention for one second, you’re gonna end up on the bottom. Yeah, right. So. So it’s, so I’ve just found that that is just really important for me, in terms of like, what I do and being able to just kind of maintain my energy level, maintain my focus, because then like, after, you know, an hour or two of, of working out or rolling or wrestling with friends or training with different folks, it’s like, now I’m ready to go solve whatever problem at work for the day and like I’ve fully processed all the different news for the day. That’s, that’s come in, and and we’re just ready to go.”