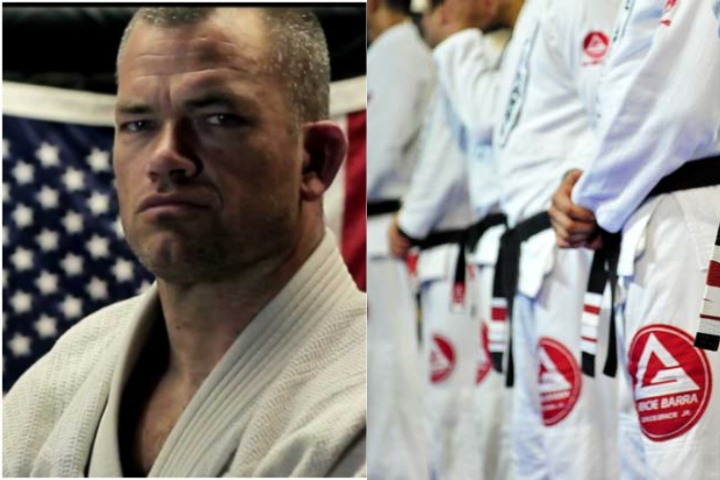 You will sometimes start training at a BJJ academy and are faced with and arrogant instructor, which is the opposite of what a humble and ego-less BJJ instructor should be.

Ex-navy Seal commander and BJJ Black Belt Jocko Willink his co-host, Echo Charles, talk about arrogant instructors in BJJ and how to avoid it.

Echo: You say Jiu-Jitsu makes you humble. Why do some Jiu-Jitsu instructors and many Jiu-Jitsu practitioners act like complete, arrogant jerks.

Jocko: Now, I’ve talked about how there’s bad apples in the Jiu-Jitsu communities for sure. But the way that I talk about Jiu-Jitsu and the way we talk about it, like everybody that does Jiu-Jitsu should be some Buddha like enlightened being at one with the universe-

Jocko: And totally free of any ego, right?

Jocko: Because that’s what we talk about Jiu-Jitsu, but like I said I’ve talked about the fact that there’s definitely bad people in Jiu-Jitsu and that’s why you need to be careful when you’re …

Jocko: Jiu-Jitsu should not be a cult. You should not be worshiping your instructor. Your instructor is a human being. There’s been Jiu-Jitsu people who have been wrapped up in all kinds of terrible stuff, every kind of crime you can imagine, so again; just like a person the military, just like a SEAL, just like being in the SEAL teams doesn’t make you a good person, it applies to everything else. Just because you’re a black belt in Jiu-Jitsu doesn’t make you a good person.

Jocko: Here’s a good one. Just because you’re a priest doesn’t mean you’re a good person. There’s plenty of malevolent people out there that wear the cloth of God but actually practice the work of Satan. So, you have to apply that rule to everything and it’s definitely the same with Jiu-Jitsu.

Jocko: Jiu-Jitsu is a power, it’s a position of power, right? When you’re good at it you have some power over other people and some people are going to abuse that power.

Jocko: So if you realize that when you start, that makes you humble. And if you remember that as you get better, it will keep you humble if you don’t forget that. But what happens is, sometimes people forget that it’s Jiu-Jitsu that gives them the power to submit other people and it’s not their power.

Jocko: Right? It’s not their power. They believe that they are the power of Jiu-Jitsu. They think it’s them, and so they think they’re better than anyone else and what that is that’s arrogance, that’s what it is, and it’s ugly.

Jocko: I think really if I was to drill down I would say it’s caused by people that are number one, insecure. They’re insecure so they get this thing that they can dominate other people and they relish it; or you know also, people that are just not that smart. Right?

Jocko: They don’t realize. They don’t put two and two together; that oh, the reason I can choke this person is because I’ve been training longer than them.

Jocko: That doesn’t make me a better human being.

Jocko: It just means I’m better at this one aspect of being a human being.

Jocko: So, I would say those are some of the reasons. And if you end up at a school where people are arrogant, just don’t train there.

Jocko: It’s not like it’s the only school option you have.

Echo: Yeah. And if it’s getting in your way, because there’s a difference. Let’s face it, being arrogant is kind of strong, but being not humble in these teeny tiny little ways, you run into that all the time, just these small ways. Still in the Jiu-Jitsu community though, so this guy may always talk about how good his triangle choke is-

Echo: Something like this, you know, this kind of stuff.

Echo: And that’s not to mention-

Jocko: That’s not offensive though, right?

Jocko: Yeah, I’m not offended by that, but I’d probably say, “Yeah you do have a good …”

Echo: Yeah. But you know how guys will brag and be like, “I was kicking ass in that tournament,” or I don’t know, something like that.

Echo: So maybe that expectation or whatever, okay. I think you’ve kind of got to make a concession for those sorts of things.

Jocko: There’s ego on the mat, for sure.

Jocko: But at the same time I love to tap because that means I’m learning, so that’s acceptable. That’s of course, yeah, you want to train in a place where’s there competitiveness in the school.

Jocko: But this is totally different, when you get people that are just arrogant jerks-

Jocko: And they’re definitely out there.

Jocko: But most … I don’t know, I don’t want to say most. That’s the way it should be. They haven’t learned Jiu-Jitsu correctly.

Jocko: That’s not what Jiu-Jitsu’s meant to be.

Jocko: In my opinion.

Echo: 100 percent right when you say it’s like an insecure person. And not the kind broken insecure-

Jocko: No, no. You got some thing.

Echo: It’s just someone who’s just a little bit insecure. Someone comes in especially if you’re a certain type of instructor and you’re used to everyone just listening to every word you say. And then I don’t know, a student or someone comes with something different than what you said, or the opposite of what you said, or something that kind of indicates that what you said isn’t 100 percent correct it’s like boom. You’re going to defend that little position that you’ve kind of grown accustomed to.

Echo: Especially if you’re even a little bit insecure you can at least have those feelings, so.

Jocko: And it’s interesting how that, even Jiu-Jitsu once again reflects leadership and life, if you get a guy, if you get an instructor that gets shown a move but it’s not his move and he gets mad about it-

Jocko: Your respect for the instructor goes down, it doesn’t go up.

Jocko: If you get a guy that goes, “Wow, that’s awesome. Let me see that again. Let me learn that. Let me incorporate that in my game. That’s a great thing, thanks for showing me.”

Jocko: Your respect for that teacher goes up-

Jocko: Because you recognize that they’re humble, that they’re evolving, that they want to learn, that they have an open mind, which is what you want to see in your leaders and in your Jiu-Jitsu instructors.