Jiu-Jitsu Techniques: What you NEED to Know and What’s GOOD To Know 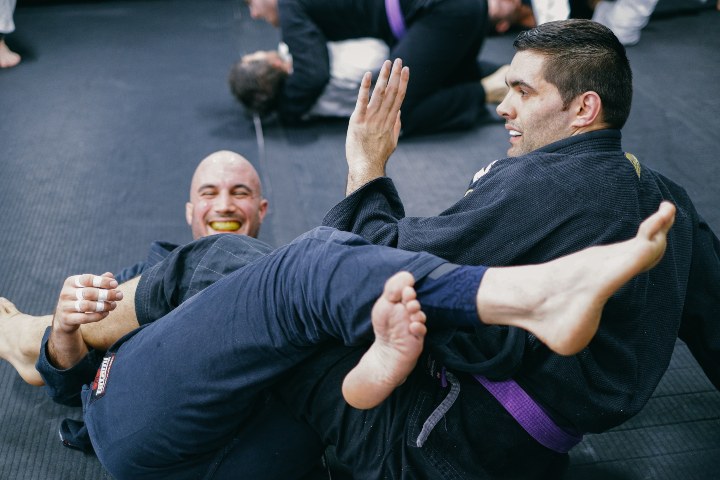 Often time different academy have a list of required techniques to be eligible to get a blue belt. For instance Gracie University requires you know these 36 techniques:

On average, 10 to 14 months of training with a minimum of 100 to 120 classes
plus passing the following test. Belt promotions are always at the discretion of
the head instructor. Factors such as above-average class attendance, natural
ability, or competing could possibly shortened the time to blue belt, while a poor
attitude, bad temper, or a lack of common morality outside the school could
lengthen it.
THROWS AND TAKEDOWNS
1. 1 leg throw
2. 2 hip throws
3. 2 double legs
4. 1 single leg
SELF-DEFENSE
1. 1 guillotine defense (standing up)
2. 1 headlock defense (standing up)
3. 1 headlock defense (on the ground)
PASSING THE GUARD
1. 3 different ways to pass the guard and get side control
HALF-GUARD
1. 1 sweep from the half-guard
2. 1 half-guard pass
GUARD
1. 2 sweeps
2. 1 armbar
3. 1 triangle
4. 1 omoplata
5. 2 chokes

“In white belt you do not have much idea. there you get to create your reflexes and your understanding of the game. To become blue belt, you need to know all of the sport. You already know how to ride, throttle, arm locks and escape the grip. Have you ever felt the pressure from opponents, can last more in training and know how to breathe properly. Have you become a creature of Jiu-Jitsu, “

And here’s what John Danaher had to say on the matter:

“What distinguishes the Brazilian system from others is its extreme INFORMALITY.There is no precise,agreed upon set of rules that determines who is a blue belt,who is a purple belt,and so forth.Part of the reason for this is the complete lack of forms,or kata (pre-arranged,choreographed sets of movements containing the idealised movements of the style in question,typically a collection of kicks,punches,blocks,and the like performed solo),in the Brazilian Jiu Jitsu system.Most Martial Arts put a lot of emphasis upon learning these katas,this is often taken to be indicative of progress.One might try to differentiate grades in terms of numbers of moves that a student knows. Such a method is clearly inadequate.

It is often pointed out that a purple belt knows almost as many moves as a black belt – he simply does not perform them as well, or combine them aswell, or at the correct time.”

So how do you distinguish what you need vs what might be helpful?