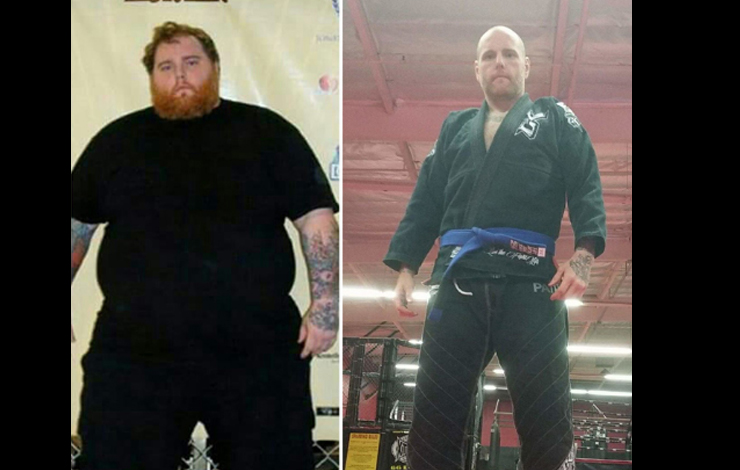 Jiu Jitsu has been a magnificent instrument for transformation of the multitudes. Weight loss success stories are by no means rare but this one is quite spectacular. It features the loss of whooping 257 pounds or  close to 117kg for us metric folks!

But Orton was lucky – through friends he was able to reach out to a bjj black belt who was opening his own gym. After listening to the advice he stripped the diet of fast food, soda and other carbs. Quickly he started preparing meals, cutting down calories and adding on lean protein.

Diet was only the beginning. Orton had always appreciated martial arts. His black-belt friend encouraged him to start training Jiu-Jitsu, so he decided to sign up for classes before the gym was even open for business.

“I did the same thing for about the first month of going to the gym. I would sit in my car and basically chicken out because I was too embarrassed,” he recalls. “I sat in my car for a while. I had done a little bit of Jiu-Jitsu, it’s one of those things I had done off and on but I never really dedicated myself to it. I could see the guys training, I could see the guys rolling, and none of them were like me.”

Still he kept on going to class and working it around his schedyle.

“Jiu-Jitsu is going to be different every single time,” Orton says. “There’s going to be a new set of challenges. Something just clicked: Initially, I started Jiu-Jitsu as a way to help me lose weight and somewhere along the way, it switched. I wanted to keep losing weight so I could be better at Jiu-Jitsu.”

And he credits the majority of the lifestyle change to bjj: