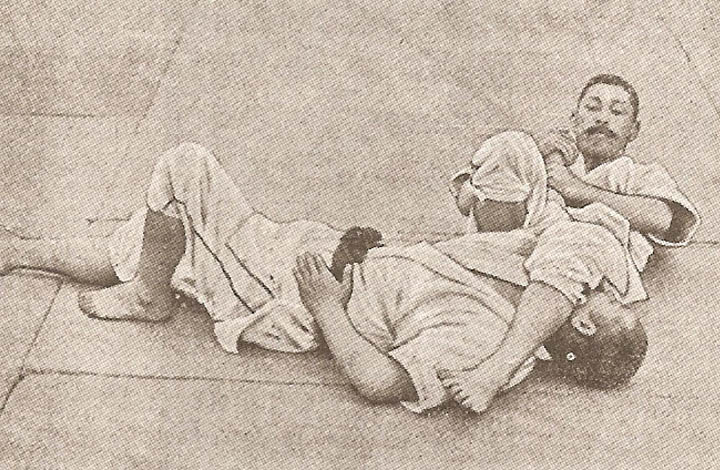 Jigoro Kano was a Japanese educator and athlete – the founder of Judo. However his ideas and reflections are something we’re not very aware today. For instance he was an adamant opponent of competition and considered Judo a skill that should be acquired as a form of physical education but not competed at.

That brings us to newaza – and just how it came to be it was included in judo. As told in book “The Way of Judo: A Portrait of Jigoro Kano and His Students” by John Stevens.

The 4th generation headmaster of *Fusen ryu was Tanabe – a small man of thin stature and very little strength. This is why Tanabe didn’t even hope to throw challengers.

Instead, by “practicing catching eels in my bare hands and watching snakes swallow frogs,”
he developed into an incomparable grappler on the ground. Keeping low, he
worked to trip up his opponent; as soon as the match was on the ground, it was
all over for Tanabe’s opponent, by either a joint lock or a choke.

But this is where the story gets interesting – Kano himself believed groundwork makes his men look badly in open competitions. Excerpt from the Stevens‘ book:

He said, “Human beings were made to walk, not
crawl.” He thought groundwork largely detrimental to Kodokan judo—grappling
on the ground quickly degenerated into unseemly schoolyard wrestling. It was
undignified. Furthermore, there was a much greater possibility of getting injured
in groundwork because of the severity of application, and subsequent resistance
to, chokes and pins. In addition, groundwork is only good against one opponent.
If there is more than one opponent, there is no possibility of grappling one-toone
on the ground. Fighters have to stay on their feet to deal with multiple
attackers. There is a saying, “To learn throwing techniques well, it takes three
years; to learn effective groundwork, it takes three months.” To Kano,
groundwork was the easy way out. For Kano, ideal judo was comprised of at
least 70 percent standing techniques and no more than 30 percent groundwork.

But Kano also believed that each victory was a positive affirmation of his teaching system and each loss was a wake up call.

Now here’s where history gets tricky – accounts of matches between the Kodokan and the Fusen ryu differ. In one Tanabe defeated them all and Kano refused to accept the challenge:

One has Tanabe challenging the Kodokan men at the kagami-biraki of the Osaka
Branch. He roundly defeated them all, and Kano himself supposedly refused to
accept the challenge. In 1900, at an exhibition match before the crown prince,
Tanabe defeated a Kodokan man with a leg lock. At any rate, all agree that the
even the highest-ranking Kodokan competitors could not handle the Fusen ryu
fighters on the ground.

It’s speculated that from this incident Kano realized how weak they were on the ground – hired Tanabe to work with his students and adopted Tanabe’s Fusen ryu groundwork into Kodokan judo.

Kano also adapted groundwork from other jujutsu schools – mostly because he did not want his men to look bad in open competitions.