Is Breast Size An Issue In Women’s BJJ? 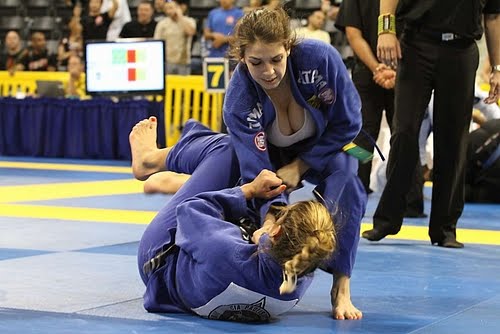 I was reading an article from ESPN The Magazine’s ‘The Body Issue’  and the subject was women athletes and how they deal with having breasts in competition. The article talks with athletes from many different sports (like MMA, Tennis, gymnastics etc). Ronda Rousey sees breast as an issue and in her MMA career:

“When someone’s on your back trying to rip your head off, things tend to slip around a bit,” Rousey says. After one failed attempt at a wardrobe adjustment, she switched her focus to freeing herself from the choke hold “so she wouldn’t snap my neck in half.” As soon as she flipped Carmouche to the floor, Rousey went straight for her own neckline. Bad move: “I got kicked straight in the chest right as I was trying to adjust my bra.”

“Gina Carano was an amazing fighter, and she had a fantastic rack,” Rousey says of the MMA fighter-turned-actor. But then again: “You don’t see big t*tties in the Olympics, and I think that’s for a reason.”

And inside the Octagon, Rousey’s boob issues go deeper than the cotton-Lycra blend. “The bigger my chest is, the more it gets in the way,” says Rousey. When she’s fighting at her most curvaceous weight, “it just creates space. It makes me much more efficient if I don’t have so much in the way between me and my opponent.”

And in the rare case that a breast is on full display, all hell can break loose. Even as Carmouche was threatening to break her neck, Rousey felt as if her falling bra was a life-or-death situation too. If she failed to get a grip, “I’d be morbidly embarrassed,” she says.”

How do larger breast affect sports performance? One thing for sure is that breasts will weigh you down. A normal A-cup breast will weigh in at 0.25 kilos. Every additional cup size adds another 0.25 of a kilo. An athlete with a double-D chest carries more than 1.8 kilos of additional weight. That is like the weight of an extra gi while rolling.

For some women large breasts are synonym with back and neck pain, degenerative spine disorders, painful bra strap indentations and even anxiety and low self-esteem. Many female athletes are concerned that having a big bust is compromising their potential success in their sport. For example, some gymnasts are taking dietary measures that lead to near starvation to avoid developing breasts and other athletes are removing them surgically. 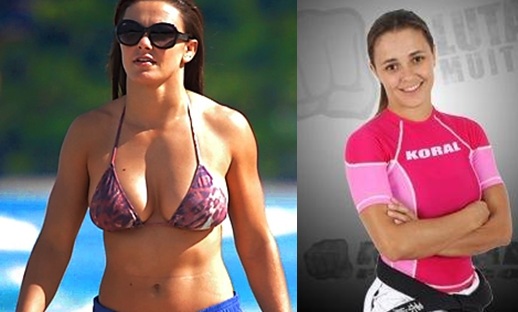 In regards to BJJ, some of the elite women athletes such as Michelle Nicolini, Mackenzie Dern or Gabi Garcia have larger than average breasts. They still achieve fantastic results.

A possible solution would be to have a rule for female athletes wear rash guard underneath their gi. With a sports bra covered with rash guard, it lessens the chance of wardrobe malfunction. This means that women athletes don’t have to have the fear in their mind that their breast will just pop out (Like Rousey did). They can then just concentrate on their fight.

One thing for sure is that larger breasts add unwanted weight, in a sport like BJJ where being as cut as possible affects your performance for the better and where you have weigh ins right before your first fight. I guess its something women just have to deal with and work around. 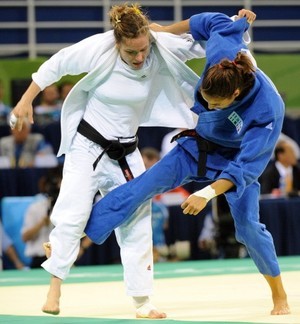 In Judo, women athletes are also required to wear rash guards under the gi.