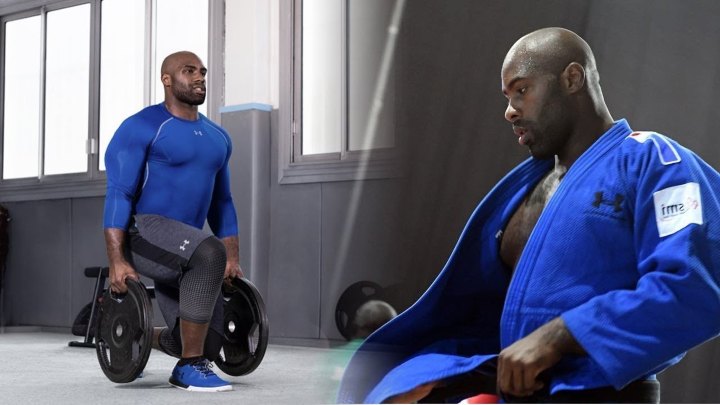 International Judo Federation has long harbored disdain for MMA but they’ve recently made it public that even though the whole world was gearing to watch McGregor – Mayweather their very own Teddy Riner is by far more dominant. Recently his trainer Benoît Campargue gave an inside look into the training regimen that makes him unbeatable:

Principle:
“The sessions evolve as the year progresses, each cycle always containing a minimum of the work done previously. 60% endurance and 30% of other things. Then, we reverse gradually. “

Before each session:
Endurance work
“We run 20 minutes. It is not a substantive work, but a global work. Running is the basis of all physical work. We go in a group, but we are all at a high level, so we get the fluff, there is emulation. The goal is to start cardiovascular work. “

Two exercises at 90% of the maximum weight, coupled with a circuit and Sleeving. 150/160 kg bench press, single arm dead lift tripled between 50 and 60 kg. 4 minutes circuit.

“The important thing is not the absolute value, but the fact of being able to reiterate a quality performance. “

Resistance session
“At the beginning of the session, we work on two quality exercises, such as bench press or push press. Then we go to the circuit. Everything is a question of dose. As you approach the objective, you gradually move to explosive, max force or circuit recall. “

Energy cardio session
Stair climber machine 4 minutes warm-up . Series of 8 minutes by shuttle. Phases of 1 minute, with 1 minute of rest between each. Alternance small / large steps. Vertical / diagonal climb. Going back and forth between pads.

The circuit
20 crunches with rotations

“The circuits go from 4 minutes to 4 times 1 minute, as the deadlines approach.”

“I combine abs in leg lifts and stretching. By putting the ankles in extension, we stretch the hamstrings, it’s called the “internal race” (…) We try to maximize the time. “

Crunchs with rotation
“On the back, the elbow comes to join the opposite ankle. It’s an exercise that teddy does very well.”

Side work
“The judokas have a hamstring deficit. We have qualities in quadriceps, but deficits in hamstring, not in absolute value, but relative to the rest of the body. I add a weight on the side during the work of Sleeving. “

Additionally Teddy adheres to some rules when it comes to rest:

Recovery
“This is the moment when the machine regenerates itself. Lack of sleep is paid for by injuries. For a sportsman, a good night is 8 hours minimum. Of course, you can go out at night, get some fresh air from time to time, but you have to catch up on the following nights.”

To go to bed early
“It’s important, even if you’re in a late-night society, and sometimes it’s difficult for an athlete to have a different pace from the rest of the world. Getting up early to sleep at night is essential.”

Video games and Internet
“After midnight, video games and the internet have a negative effect on sleep. High-level athletes are sometimes seriously affected by these addictions.”

Nap
“A nap of 30 minutes after eating is ideal. Teddy sleeps an hour, and i keep his schedule running.”