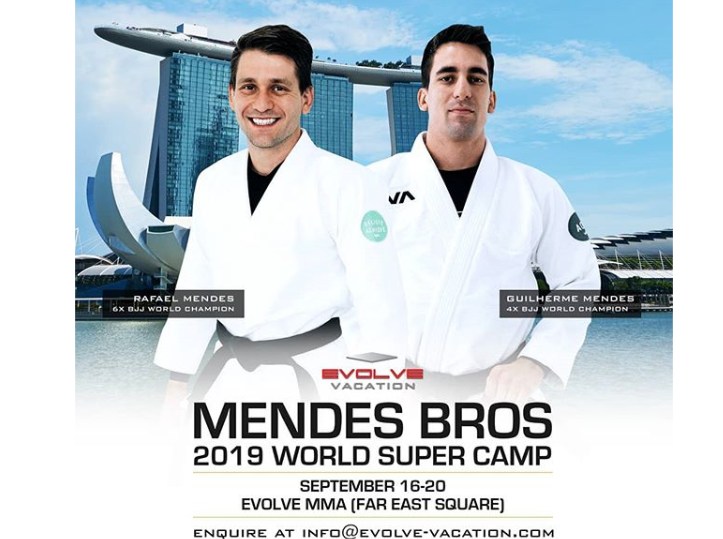 This super camp will be SOLD OUT, so book your spot NOW!

Here’s what you will get once you sign up for the Mendes Bros 2019 World Super Camp:

The Mendes Bros 2019 World Super Camp will take place during the famed Singapore Formula 1 Grand Prix Week. This week will be filled with entertainment and activities and is one of the best times to visit Singapore. Visit this link for more information.

This World Super Camp is guaranteed to be SOLD OUT due to limited available slots. Don’t miss the chance to learn the techniques and concepts of the Mendes Bros’ dynamic Brazilian Jiu-Jitsu games, which have made them two of the greatest BJJ competitors of their generation. Grab your spot NOW!

The Evolve Vacation Program offers travelers the rare opportunity of a lifetime to combine a tropical vacation under the sun with authentic training under World Champions. You can train at one of the world’s most famous mixed martial arts academies, Evolve MMA, and also enjoy the exotic hidden treasures of the beautiful tropical island of Singapore.

The Mendes Bros @mendesbros 2019 World Super Camp at Evolve MMA! With 20 hours of elite instruction from 6x BJJ World Champion Rafael Mendes and 4x BJJ World Champion Guilherme Mendes, this super camp is a rare, can’t-miss opportunity that will take your game to the next level! This super camp will be SOLD OUT, so book your spot NOW! >>> https://bit.ly/2Iwr9Io #evolvemma #evolvefightteam #bjj #mma #sport #athlete #singapore #seminar #technique #athlete #fitness