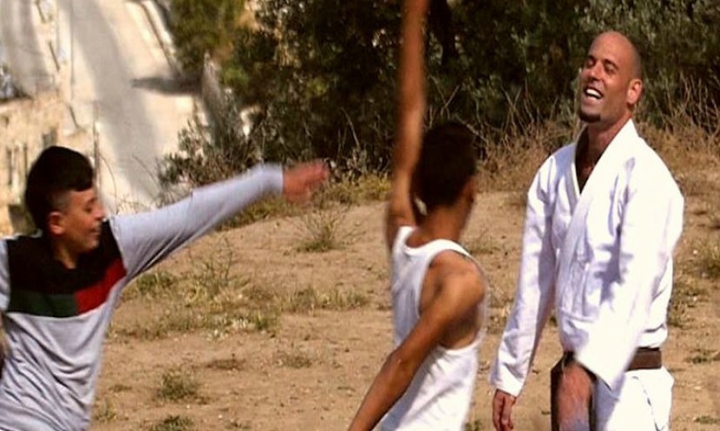 At the border between eastern and western Jerusalem, where a green line passes to divide Israel with Cisjordan, a Brazilian is using BJJ as a way to unite the people who fight each other since the middle of past century. It was at the school “Max Rayne Hand in Hand”, between the neighborhoods of Beit Safafa (majorly arab) and Patt (with a jewish population), where the project “Arvore da vida” (Tree of life), which promotes the integration between Palestinian children and teenagers with Israeli children and teenagers through the sport. From there, the project was expanded to territories such as Hebron and Beit Jalla. To keep expanding, the NGO created a campaign seeking the support of Brazilians who believe in the cause.

“Basically it’s to sponsor the mats and kimonos”

said Marcos Gorinstein, BJJ teacher and founder of the NGO who was born in Brazil and has jewish roots. BJJ works as a common language among these children, for them to be able to properly talk, get to know each other and lose the fear for one another. 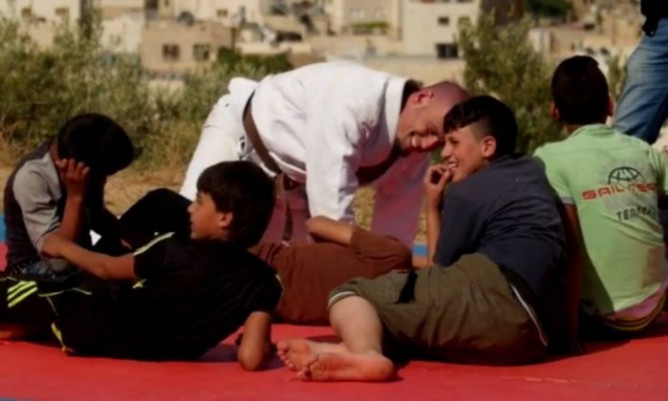 At the school the process of integration is easier since the institution receives students of several nationalities and religions. The biggest challenge actually happens in the occupied territories. In the jewish part of Hebron, where the classes happen, 25.000 palestinians and 700 jews died approximately. It was near this region when in June of last year 3 Israeli teenagers were kidnapped and killed by Palestinian radicals, which started a massive military action of retaliation. In Beit Jalla, the students are mostly from the refugee camp of Dheisheh.

In these areas, the children have violent encounters with the Iraelis, and a very aggressive and violent relation. The goal is to get them closer to other Israelis, to talk about several themes and try to see things through the other’s eyes.

The Jiu-Jitsu classes at the occupied territories are only for young Palestinians, but the project plans regular meetings for trainings with Israeli teams, which are being formed in Jerusalem. Later on, there are going be groups started at the eastern and western parts of Jerusalem, for Jews and Arabs, respectively, but also with sessions in group. 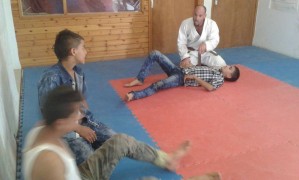 For people looking from the outside, actions like these seem unimportant, but it isn’t what happens in reality. The complexity and rivalry between the Palestinians and Israelis makes it to create and participate in projects like these an act which you need courage.

The acceptance of these children, in getting to know the other side, is a very brave act. They can be seen in a bad way by the people around them – Says Gorinstein.

The Max Rayne school, where the project started, was the target of a terrorist attempted attack, which was lead by jewish extremists at the end of the last year. Two classrooms were set on fire and the criminals wrote graffiti against Arabs on the walls.

– An episode happened to me. I was going to Hebron when I was attacked and mistreated by Iraelis which said I was training our enemy – Says the BJJ teacher.

For reasons like that finding financial support in Israel to keep the project going isn’t easy at all. This is one of the reasons which made the campaign for collective sponsorship at the website juntos.com.vc. The goal is to gather 20.000 brazilian reais (4680 eur) until the 28th of september. For all the groups kept by the project, only the one at the school has to pay a fee.