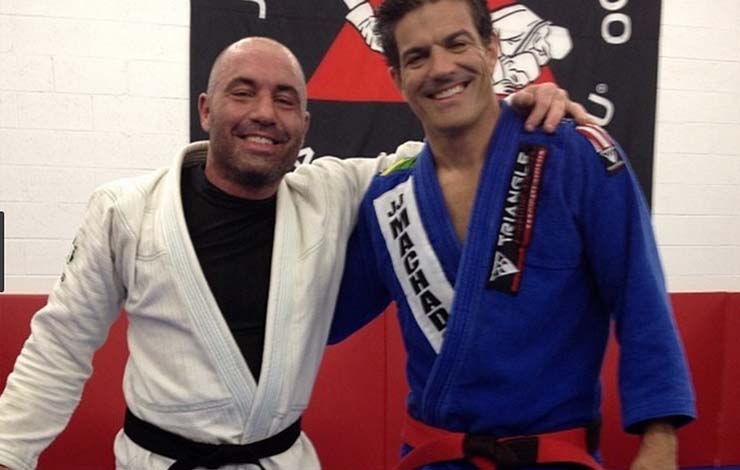 Joe Rogan has been the utmost authority for all things martial arts. He’s recently piped in about something that’s been grating him for quite some time – Jiu Jitsu matches are not fights (in spite of what AJ Agazarm would have you believe):

“Jiu-jitsu is not fighting because you’re not hitting each other, So, you’ve got a jiu-jitsu match, for sure. Not really a fight because you can’t get leg kicked, you can’t get elbowed in the face, you’re not going to get kneed into a coma, it’s a totally different experience than a fight, and it’s almost disrespectful, in some ways, to call a jiu-jitsu match a fight. But other people like to refer to it as a fight. There’s nothing wrong with that.”

The announcer/actor/comedian has been a prolific podcaster since first starting more than 5 years ago. And while podcast is very much the taste of today with many shows just starting up over time Joe has been a vocal advocate of jiu jitsu and through his fanboying over the sport many have started. 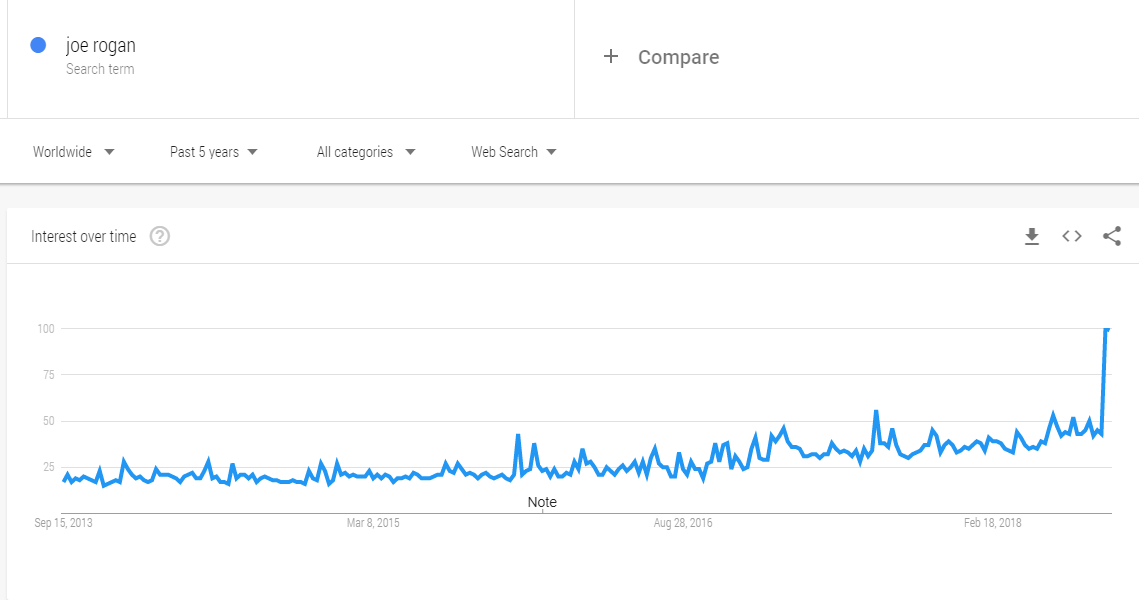 Of course the recent spike very much related to the Elon Musk guest spot that made it into all of mainstream media.

Now Joe Rogan Experience featured many guests from all walks of life but what you might not been aware of is that it’s a constant in the Itunes top10 podcast for quite a while now. In February 2014, the podcast won a Stitcher Award for Best Overall Show at its 2013 edition of its awards. In January 2015, the podcast was listened to by over 11 million people. By October 2015, it had grown to acquire 16 million downloads a month.

How smashing blue belts is the best way to get better

The best way to get good at jiu-jitsu is to strangle blue belts. You go and you find people that are just learning but they’re not as good as you and you choke the f*ck out of them.

And in this latest bit how everything boils down to basics of jiu jitsu:

“Basic jiu jitsu meaning things that everybody knows, triangles, armbars, chokes. Those are basics. It doesn’t mean it’s simple or dumb. It’s like that old Bruce Lee saying don’t fear a man who has practiced 10000 kicks once, fear the man who has practiced one kick 10000 times. There’s something to having a precision to those techniques that’s just .. Roger. Roger Gracie same thing to this day . Basic style crushes everybody. “

Jocko said: “There’s definitely something more in jiu jitsu that gets into people’s heads… I still cannot stop a youtube video with a cool move I just have to watch it because there’s so cerebral there’s something about it and I see this when I teach kids it – you’ll see the knucklehead kids the kind big they don’t really get it then you get this smart kid you can tell they’re smart and those are the kids that get really into jiu jitsu because they realize oh if I learn this I can beat that big kid and that’s where it starts but it can definitely be addictive.

Rogan added: Jiu jitsu is the only martial art that it really works like in the Bruce Lee movie where the little guy can beat the big guy…”

about benefits of Jiu-Jitsu and staying in shape:

“Stephie Daniels: You’re 46 but you have the body of a 25 year old, you really do. You are in immaculate shape. You work hard for that. You eat right, you exercise and you do all the right things. Is that for quality of life now, or is it more for longevity reasons to be around longer for your children and their children?

Joe Rogan: It’s certainly both. I would love to be around for my children, no doubt about it. I love being a dad and the last thing I would want is my kids to miss me because I was an idiot and didn’t eat right, but It’s not totally selfless; I would still do it even if I didn’t have children. I would still take care of my body. One, because I’m sane, two because I love doing jiu-jitsu. I’m on a hiatus right now from jiu-jitsu because I’ve been having back problems, but they’re almost entirely worked out now, I’m almost 100%. I’m giving myself the right amount of time for rehabilitation this time. To enjoy jiu-jitsu you have to be in good shape, otherwise you just get f—ing strangled all the time. I’ve been doing Jiu-jitsu for a huge part of my life; it’s been a big part of my life since 1996, so that’s another reason why I enjoy exercise.

Also, I like blowing off stress. One of the most underrated aspects of exercise is the effect on the mind. I have friends that are really intelligent who sort of pooh-pooh taking care of the body as if it’s some sort of egotistical, vapid approach. I think they’re doing their mind a disservice by not clearing out all the cobwebs that come from stress and hormones building up. There is all sorts of fight or flight s— going on and reward systems that are in place in your body that are not being managed by day to day society working in a cubicle or sitting in your car in traffic. There are all sorts of things that your body doesn’t do that it’s sort of designed to do.

For me, one of the best ways of staying level is forcing myself to exercise extremely hard. Extreme, rigorous exercise. I have two gyms in my house. I have one gym that’s set up full of weights, kettle bells, chin ups and stuff like that. I have an elliptical machine in there and all sorts of different weights and a gravity bar to hang from my ankles. My other gym is an MMA gym. It’s in my garage and it’s all matted. It has heavy bags and it has a TV that I watch fights on to get motivated, and I work out there. That keeps me sane. It keeps my stress level low.

There’s a big difference between how I respond to situations in life when I’ve been working out hard on a regular basis and not. If I get out of jiu-jitsu class after a really hard roll and a boulder landed on my car, I’d be bummed out, but my reaction would be so different than if I was on my way to class all tense and angry cause I haven’t had a chance to work out for a few weeks, and a boulder landed on my car. Then I would be like, ‘What the f—!?’ The perspective changes depending on the stress level.

I think we would all do ourselves a world of good if we removed the stress from our lives and took care of our bodies. If I had a company, a place where everybody showed up at work, one of the things I would do is set up a f—ing gym. Set it up, have it be free and give people an hour every day, even if it means they only work seven hours a day instead of eight. I would be happy to have someone who only works seven hours a day instead of eight, but they work out for an hour. Then I would think I’m giving them something back, giving them something for free, alleviating their stress, lightening their load and, I would assume, improving their quality of life. I think most people burden themselves down with a lot of stress and don’t give themselves nearly enough release from that stress.”

If you are doing bjj and haven’t had a chance to revisit JRE here are some notable bjj related episodes:

Of course there are many many more significant editions as an episode rarely goes by without Rogan mentioning and in depth analyzing benefits bjj has provided him with.