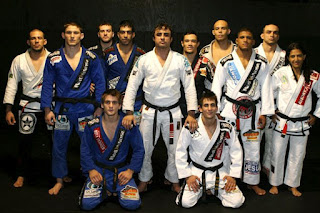 “The 2012 IBJJF Brazilian Jiu Jitsu World Champions are just around the corner and we are going to do breakdowns of the major BJJ teams and their top athletes.

The name Atos is still fairly new in the Brazilian Jiu Jitsu world, but the team has made a big impression. Despite being an extremely small team, Atos posts impressive medal counts at the black belt level. Atos especially excels in the lighter weight-classes, making them the pound-for-pound most talented team on the mats.

Atos is a destination gym, as it has relatively few homegrown products but has put the finishing touches on several great champions. Started by Ramon Lemos, a Nova Uniao black belt competing under the Brasa banner, and by Gustavo Campos, a student of first Carlos Aveline and then Rickson Gracie. Lemos and Campos wished to start a camp where they could focus their efforts on adapting to the new realities of competitive grappling.

Lemos reached out to a fellow Brasa teammate Andre Galvao, who agreed to join Lemos and Campos in late 2008. The three shared a passion for Christian missionary work, and they took a name inspired from the New Testament Book of Acts: “Atos”.

Atos’ strength has always been in the lower weightclasses. The core of the team has been centered around two of Lemos’ top students: Rafael and Guilherme Mendes, who followed Lemos from Brasa to Atos.

The brothers often compete in different weight-classes, Rafael in Featherweight and Guilherme in Light-Featherweight. Both are famous for their submission oriented style and their wonderfully technical guard work. Since becoming black belts in 2009, both brothers have won world championships twice and many medals in major tournaments.

Rafael is the reigning world champion and has been the king of the division winning at least one major tournament a year since 2009. Guilherme also reached the finals of last year’s Mundials and closed the division out with fellow Atos Light-Featherweight, Ary Farias.

Farias was a member of Checkmat until 2010 when he switched camps to Atos and is considered one of the rising starts in the division. When counting junior and lower belt divisions, Farias is already an eight time world champion and he is just beginning to hit his stride as a grappler.

Mike Fowler shocked the BJJ world earlier this year when he announced he had left Llyod Irvin’s team to join Atos. Fowler was one of the prized students of Irvin’s academy, earning his black belt in under four years and bringing recognition to the school in its early days. However, Fowler is still searching for his first major gold medal at the black belt level and this move is calculated to help him achieve that goal. Fowler, and his signature leopard print hair, will also be competing at Featherweight.

While Atos tends to dominate the lower weight-classes they do feature some heavier grapplers. Claudio Calasans is fresh off his 2012 Pan Ams gold medal at Middleweight and also has won a CBJJF World Cup in this year. Calasans is the son of one of the best Brazilian Judokas ever, and as one would expect Calasans’ judo is excellent. Originally he trained in BJJ to compliment his Judo, but soon the reverse became true. Claudio is a very well rounded fighter with excellent top position, guard work and leg locks.

Andre Galvao is one of the primary founders of the camp and his drill heavy style of training contributes a great deal to the camp’s success. Since returning from his stint in Mixed Martial Arts Galvao has reestablished himself as one of the best grapplers on the planet. The Medium-Heavy division is stacked with talent this year and Galvao has a tough road ahead, but he is considered the favorite to win the weight class.

On the women’s side of things, Atos has snatched another top rated fighter in Kyra Gracie. A fixture in women’s BJJ history, Krya has left her home team in Gracie Barra to join Atos. She will join newly promoted black belt Bruna Ribeiro as Atos’ only female representation at the black belt level.

Atos has a history of finishing extremely high in the team points standing despite being so small because every black belt is more than likely to finish in the top three of their weight.

The 2012 Mundials will be taking place from May 31st – June 3rd.
Check out our Preview and predictions: http://www.bjjeasteurope.com/2012/05/ibjjf-worlds-2012-analysis-predictions.html“