The website Bullshido.net which is famous for uncovering frauds and false claims in martial arts, has now focused on the leading federation of Brazilian Jiu-Jitsu, the IBJJF which is run by Carlos Gracie Jr. In a long set of accusations and research, bullshido accuses the federation of the following:

(1) is a US corporation, virtually indistinguishable from the corporation that constitutes Gracie Barra.
(2) is not the legitimate international governing body for the sport of Brazilian Jiu-Jitsu
(3) was originally founded by people heavily involved in drug trafficking (Silveira brothers), and eventually co-opted by Carlos Gracie, Jr.

The main facts about the IBJJF that bothers many BJJ practitioners are the following according to Matt Philips:

*They give the impression of being a Brazilian organization, sharing the same government endorsement as the CBJJ, when in fact they are a US for-profit corporation that happens to be owned by the CBJJ president.

*They give the impression of being the World Governing Body for the sport of Jiu-Jitsu that sits over the National Governing Body of Brazil (CBJJ), when in fact they are a private venture that does not conform to the standards for WBGs governing other international amateur sports (IJF, FIAS, FILA, etc).

*The IBJJF and USBJJF are private corporations owned by the people running one of the sports dominant teams. FIFA, for example, is not owned by the captain of Manchester United (or anyone at all for that matter), and holy hell would break out if such a thing were to happen.

*Despite cultivating an appearence of being the National Governing Body for the US, the USBJJF is privately owned and run by Gracie Barra’s Andre Fernandes, and is not comparable to the NGBs for other US grappling sports, or Brazil’s CBJJ in any meaningful way. There is, for example, no US national team, or motive for having one.

*Both the IBJJF and the USBJJF collect very substantial amounts of money from just the two big tournaments alone, but show no evidence of a program of reinvestment in the growth or practice of the sport, as is uniformly the norm for sport world and national governing bodies.

**The public record indicates that the USBJJF has no board of directors, no officers, no physical address, no by-laws, no charter, and no telephone.

**The public record indicates that the IBJJF has no board of directors, no officers, no physical address, no by-laws, no charter, and no telephone.

BJJ red and black Fabio Santos went on the record to denounce instances of corruption and tax evasion from some instructors in the US. He also questioned the financial motives of the IBJJF in their ranking scheme. He also mentioned financial improprieties including tax evasion. 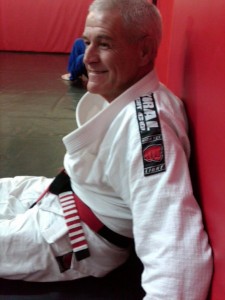 Some instructors are ruining the reputation of the art, by viewing the student only as a fountain of money. They come to the United States to teach. After recruiting students and taking their money they proceed to move back and forth between Brazil and United States, ongoing, without respecting their obligations as a business owner or even paying taxes, and in some cases they even abandon their students.

Even the IBJJF (International Brazilian Jiu-Jitsu Federation) is contributing to the diminishment of the integrity of the art by elevating its financial interest over the quality of instruction by accepting changes to the original belt system established by the founders of the Gracie Jiu-Jitsu and altering the traditional form of Jiu Jitsu instruction. This is done out of greed, pressure from parents and impatient students that think the process required to get a belt promotion is taking too long!

The attitude of the IBJJF is self-serving and not helpful to students or schools, in that it undermines a reputation that has taken decades to create. Furthermore, while it exerts a force of authority and governance to the sport here, it rarely contributes to the support, when needed, by its members. That is why tradition and integrity are important. Tradition strengthens the real martial art where all is earned. The Professor must take the time to know the students character to award them a Black Belt. Some will never have the character to earn this however; it can motivate others to change both mentally and physically to become a better person. If we lose our tradition we lose everything. Greed, complication, inefficiency and breaking tradition is weakening the REAL JIU JITSU! SAY NO TO THE CORRUPTION OF JIU JITSU!! Professor Fabio Santos 7th Degree Red and Black Belt Student of Rolls and Rickson Gracie.